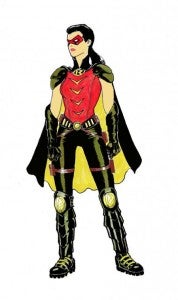 The alternate Earths of the relaunched DC Comics Universe just might be a little more interesting than the main DCU Earth. It's already been revealed that on one alternate Earth Superman will be black and President. Now, DC Comics has announced that on a different alternate Earth known as Earth 2, Robin the Boy Wonder will be a girl. The girl Robin has been trained as a detective, fighter, scientist, pilot and all around crime-fighter. On Earth 2, Robin is Helena Wayne, who is the daughter of the Earth 2 Batman. However, she might not necessarily be the daughter of Bruce Wayne. While DC Comics has confirmed that there will be a Wayne behind the Earth 2 Batman mask, they have stopped short of saying that it will be Bruce Wayne. Could it be Earth 2 Batman is Thomas Wayne, who had a daughter instead of a son? One thing that is known about the Earth 2 Batman is that DC Comics describes him as more ruthless and dangerous. In fact, DC Comics has hinted that the Earth 2 Batman will kill someone to save his daughter. Will Earth 2 Batman's deadly ways push his daughter away? DC Comics is also hinting at that possibility, because Helena Wayne will eventually give up her Robin costume to become the Huntress. Not only will she become the Huntress, but she will somehow jump from Earth 2 to Earth 1. DC Comics has promised some clues as to what happened will appear in Huntress #6, while the rest of the story will be told in World's Finest #1. The design for Robin of Earth 2 was done by artist Kevin Maguire.

Robin The Boy Wonder Is Now A Girl On Alternate Earth