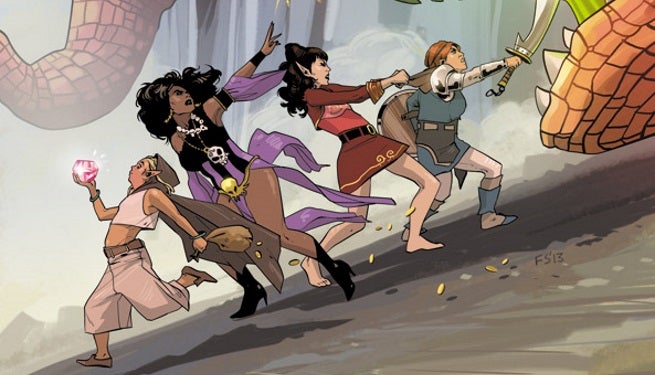 In a statement on his blog, writer Kurtis J. Wiebe has announced that artist Roc Upchurch will no longer be illustrating Rat Queens.

"As of today, Roc Upchurch will no longer be illustrating Rat Queens," Wiebe says in his blog entry. "This is going to be a transitionary period for the series as we rebuild and prepare for a new start. I am committed to Rat Queens, to stand by what it has always been praised for and to prove to the fans that they weren't wrong in loving it."

The departure stems from Upchurch's arrest on charges of domestic abuse, filed by his ex-wife (via The Mary Sue).

"I'm not a stranger to domestic abuse," Wiebe says. "I know that keeping abuse a secret and being afraid to speak about it are why so many people suffer in silence. It is a topic that needs to be openly talked about and there needs to be a feeling of safety and acceptance for those that come forward with their stories. It is why I am addressing this news rather than burying my head in the sand."

Rat Queens is a Dungeons & Dragons inspired series, about a raucous, all-female adventuring party in a fantasy world, published at Image Comics. The series was nominated for the 2014 Eisner Award for Best New Series.  An animated television adaptation is in the works.