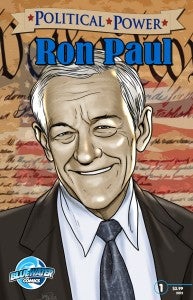 While we don't know how Ron Paul will do in Iowa, New Hampshire and South Carolina, there is one thing about the Presidential candidate's near future we can predict: He's getting his own comic book this February.

"Political Power: Ron Paul" focuses on the life and journey of the doctor-turned-politician, with a particular emphasis on his Libertarian viewpoint and strongly held beliefs.

“In a way, Ron Paul is like any other committed musician or actor. He has a vision, he's well read and he's very much his own person. You may not agree with everything he says but you have to admit that at least he's done his homework before he's said it, which is more than you can say for most politicians,” said writer Marc Shapiro.

Paul's charisma, along with his ability to spread his message to a wide range of people, is one thing that stood out to Shapiro. What surprised me in researching Ron Paul for this comic was his ability to cut across lines when it comes to age, gender and political point of view. College kids would be the last group of people you would expect to support a Republican but Paul has sizeable college student as well as solid independent thinker support,” said Shapiro.

"Political Power: Ron Paul" was written by Shapiro, drawn by Luciano Kars.  The cover was created by Joe Philips.  The book hits shelves in February.

Ron Paul Gets His Own Comic Book