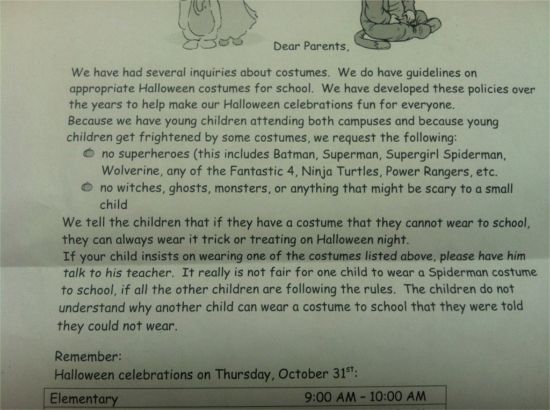 On Halloween, many schools around the country allow students to wear costumes to school. Many schools also likely have guidelines on what type of costumes can be worn so students don’t wear anything offensive or inappropriate.

However, one school seems to have an unusual idea of what is inappropriate. According to a letter from an elementary school uploaded to Reddit by user Nundercover, students are not allowed to wear superhero costumes. The letter notes, “no superheroes (this includes Batman, Superman, Supergirl, Spiderman, Wolverine, any of the Fantastic 4, Ninja Turtles, Power Rangers, etc.)”

Why the ban on superheroes? According to the letter, it’s because superhero costumes might be frightening to the younger children at the school. In addition to superheroes, the school also bans “witches, ghosts, monsters, or anything that might be scary to a small child.”

We’re not sure what that really leaves for the kids to wear, except maybe fairy princess costumes. Even if you’re accepting of the fact that the school is banning scary costumes on Halloween, when did the Ninja Turtles and Power Rangers become scary? Or even Superman for that matter?

Also, it’s interesting that the school only calls out superheroes and not supervillains, so maybe there’s a loophole for Bane, The Joker, and Venom.

School Bans Superhero Costumes As Too Scary For Halloween