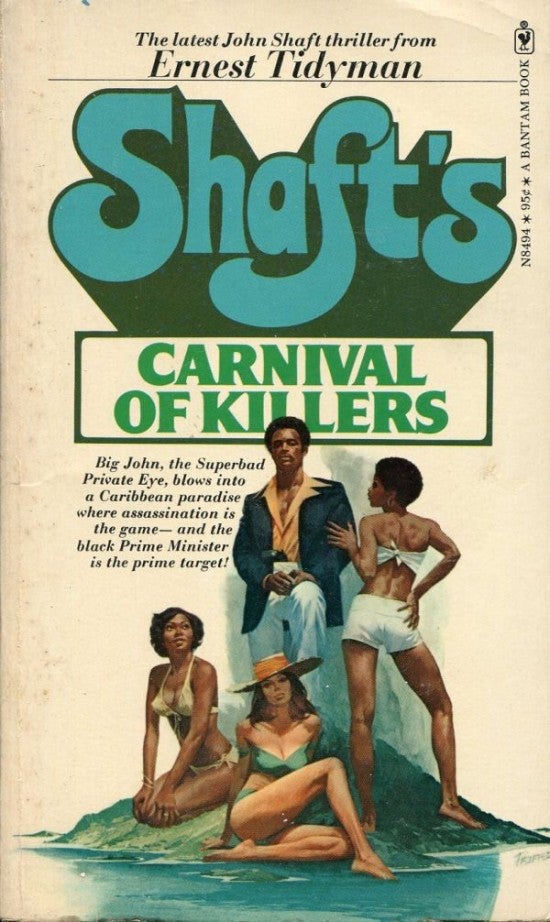 Who's the Black private dick that's a sex machine to all the chicks, and is headed to Dynamite Entertainment? That would be Shaft. Best known from a series of three feature films starring Richard Roundtree, Shaft began his life as the lead of a detective novels franchise not unlike Fletch or Miss Marple. Between 1970 and 1975, Ernest Tidyman actually wrote seven Shaft novels -- Shaft, Shaft Among the Jews, Shaft's Big Score, Shaft Has a Ball, Goodbye, Mr. Shaft, Shaft's Carnival of Killers and The Last Shaft. These novels have long been out of print, and Dynamite intends to bring these back and make them available again.  In addition, the new prose stories and original graphic novels will be the first new Shaft stories, outside of the 2000 movie starring The Avengers's Samuel L. Jackson, since Tidyman's passing. "The literary craftsmanship that built John Shaft sent him into the world fully formed and moving," said Curtis Brown literary agent Steve Kasdin, who represents the Tidyman estate. "You knew who and what he was from Jump Street. So much so that even a less than stellar sequel or two didn't kill his standing. The consensus seemed to be: 'Oh my Lord, they done put poor Shaft in another bad movie.'  I'm thrilled with Dynamite's vision for Shaft, and look forward to his new adventures." "John Shaft is an American Icon, with feature films starring Richard Roundtree and Samuel L. Jackson," said Nick Barrucci, CEO/Publisher of Dynamite. "Shaft has resonated in popular culture because he's such a cool, compelling character.  We couldn't be more happy that we're getting a chance to tell new stories in multiple mediums, with all new prose in addition to Original Graphic Novels, and create a publishing program that will bring Shaft back to the forefront of pop culture, where he belongs!" Dynamite, who primarily focus their energies on comics, have just released the Troy Brownfield novel Prince Dracula.

Shaft Comes to Dynamite Entertainment For Comics, Prose and Rights To Existing Books