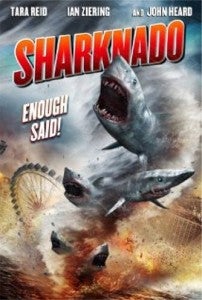 Last night, the TV movie Sharknado proved to be a huge hit on Twitter. Sharknado was a Syfy channel movie that was about a tornado full of sharks if you couldn't have guessed that from the title. Of course, with everybody talking about Sharknado, it's no surprise that talk of a sequel has arisen. When asked about a sequel by The Hollywood Reporter, Sharknado director Anthony C. Ferrante said, "We always joked about sequels and what would it take to top this one, but nothing ever official. This being so successful, I can't imagine they wouldn't do another one and if we could find a way to top ourselves, I'd love to come back." As far as what the plan would be for a sequel, Ferrante told the Mercury News, "I mean, what do you do after Sharknado? You've got to up the ante. I don't want to compare this to Star Wars, but if this is Star Wars, then you've got to make Empire Strikes Back." However, even though the Twitter buzz was phenomenal, Sharknado actually didn't do that well in the ratings, drawing in just around a million viewers. It's possible that Sharknado is a movie that people are more excited about talking about on Twitter than actually watching. It's also possible that Sharknado could fair much better with a second airing now that everyone knows about it. Syfy plans to find out, because they will be re-airing Sharknado on Thursday, July 18 at 7 PM.