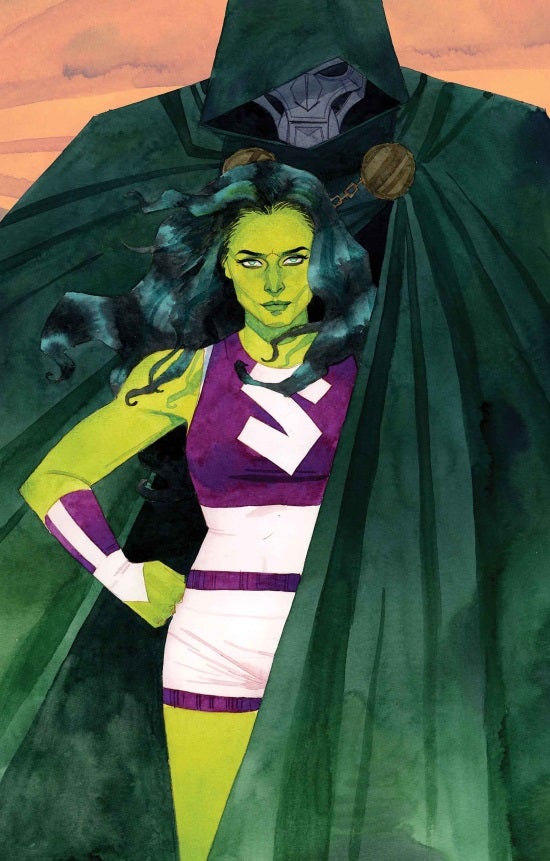 Having seen various previews for the series featuring the stylized art of Javier Pulido next to the beautiful covers of Kevin Wada, I've actually wanted to pick up She-Hulk (written by Charles Soule) for a while just to see what it's like. Luckily, an appearance from the character Kristoff Vernard (Adoptive son of Doctor Doom and intermittent supporting character of the Fantastic Four since 1982 and created by John Byrne) gave me an excuse to give the series a shot. It's an enjoyable and beautiful read with only one major drawback that probably means a lot more to Fantastic Four readers of a certain age than anyone else. 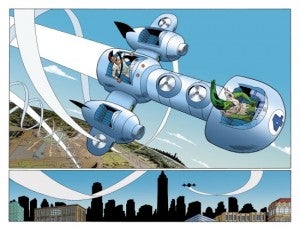 The Good:I'm just going to say it now, Javier Pulido's art is beautiful. It's hard to put into words precisely why it's so beautiful though. It's simple and clean with inventive panel layouts and looks incredibly polished, but I feel like there's more to be said. In a way, it reminds me of Mike and Laura Allred's work even though they aren't entirely similar. He gives everything a sense of fun, energy, and life which perfectly complements the narrative contained in this issue. Surprisingly, I'm strongly reminded of Jack Kirby in the way Pulido draws women's faces from the front. Like Kirby, there's a certain roundness and fullness to the face. It's neither good nor bad necessarily, but anything that reminds me of the King gives me a smile. He also does a great job capturing iconic elements like Doom's armor and a classic post-bathtub-style Fantasticar. Finally, I have to compliment his ability to render cleanly detailed architectural elements. Even though a casual reader may not notice this touch, it does add a great deal to his backgrounds and suggests that he has a keen eye for geometry. On the coloring front, Muntsa Vicente's selection and use of bright and energetic colors throughout perfectly complements the life and energy of both plot and artwork. This really goes a long way toward bolstering the enjoyment of this book. Additionally, I already mentioned Kevin Wada's covers, but I'll do it again. They're beautiful. Perfectly painted, possessing preposterous portions of polish and panache. 'Nuff Said. 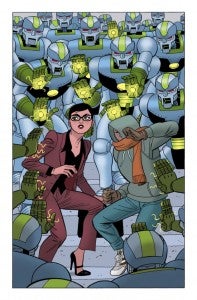 I believe this is my first time encountering writer Charles Soule. While I feel that the narrative here is a bit thin and simplistic, I imagine it's done to make room for Pulido's artwork and thus find it hard to complain. Additionally, this appears to be the first issue of at least a two-issue story to be continued next month. As such, I believe I will have to reserve judgment until I have finished this story/arc. What we do get in this issue is perfectly enjoyable. (SPOILERS!!!) Kristoff Vernard, adoptive son of Victor Von Doom, is seeking asylum in the U.S. and comes to Jennifer "She-Hulk" Walters for legal representation. It turns out that he has been in the country for one year exactly. Thus, Jennifer has to brave hordes of Doombots to get Kristoff to court before his window to request asylum closes. She manages it with help from Patsy "Wildcat" Walker only to have Doom show up in person and abscond with Kristoff. While this plot is relatively straightforward, it is done well with energy and humor and a few welcome nods to the Marvel Universe. One thing that I will applaud Soule for is including Patsy as a supporting character. If you've never heard of her or have only a passing familiarity with the character, do a search or two and read up on her history. You'll thank me. I hadn't really heard/read much if anything about her and she isn't exactly an obvious choice to use in this book, but knowing who she is and her backstory, I'm curious to read more of her. The Bad: There honestly isn't a lot to say here. This comic is what it sets out to be, a fast, fun romp with fantastic art. It's hard to fault it for being exactly what it wants to be. If you want something else, go somewhere else. If this were a $3.99 comic, I might call foul but at $2.99 I feel that it's more than worth the price of admission for what you're getting. As I mentioned, I intend to reserve full judgment on the plot until I've read issue four. That being said, if you're looking for depth and complexity, this isn't the place to find it. On the art front, I'll just make a couple of notes. I'm not sure why the lower lids of She-Hulks eyes are always so dark. It makes her look like she's really tired, possibly after an all-night bender. Also, creative panel layouts are great but the reader shouldn't be confused about panel reading order. That got muddled a couple of times, particularly on the pages where She-Hulk demolished Doombot Ernst. There is one other big note I want to make, but it will only matter to a select readership. As such, I'm putting it over in… The Questionable Where we talk about things that are neither good nor necessarily bad, but at least are a little head-scratching. This is not Kristoff Vernard. As a longtime and dedicated reader of Fantastic Four, particularly one who cut his teeth on the '90s run of the book where Kristoff was a member, I'm disappointed to see his depiction here. In this book, Kristoff is a disaffected twenty-something with classy duds and a pleasure-seeking, man-about-town air. On top of that, he seems completely useless in terms of looking after himself and relies on She-Hulk to carry him (at times, literally) through this plot. Now, I understand the story that Soule is trying to tell and that he needs this version of Kristoff to make it work. Still, some readers have a soft spot for the guy and he gets so little attention that seeing him reduced to a fop here is a little annoying. On top of that, I can honestly say that I have no idea how old he is supposed to be anymore. The images below show the evolution of Kristoff over his existence:

The picture at left is from Fantastic Four issue 258 from 1983 by John Byrne where Kristoff is apparently somewhere around six years old, roughly the same age as Franklin Richards. The second image from the left is from Fantastic Four #403 from 1995 (with art by Paul Ryan), where Kristoff appears to be around 10 years old, only slightly older than Franklin whose age had been recently screwed around because of time travel. The next image is from Christos Gage and Mario Alberti's Spider-Man/Fantastic Four, published in 2010. In this and even more clearly in other images from this miniseries, Kristoff still appears to be a kid in an adult-sized suit of armor, roughly the same age or slightly older than Franklin Richards. Then we jump to the next image from FF issue 13 published in 2011 where for some reason Kristoff appears to be a full-grown man in his twenties or even thirties, as depicted by artist Juan Bobillo. This appearance is further cemented by his depiction in 2013's New Avengers #6, not pictured here, with art from Steve Epting. The image at far right is by Javier Pulido from She-Hulk #3, currently under consideration. Not only does he not resemble the other Kristoffs presented but he may have even de-aged from the previous two appearances just referenced and is now at least 10 years older than Franklin Richards because of… reasons, I guess. Beyond the age question, I do question Kristoff's general uselessness in this book. As depicted in recent Fantastic Four titles and New Avengers, Kristoff is still a competent super-character (hero or villain depending on situation) who is capable of defending himself and rocking a custom suit of Doom armor. As a very young child, he ruled Latveria and blew up the Baxter Building after launching it into orbit. Even if he felt the need to seek asylum (questionable because he recently seemed to be pretty buddy-buddy with/deferential to Doom), I have to believe that he'd have some equipment on him and blow up a Doombot or two himself. While I'd like to get clarity on Kristoff's current age and status, I recognize that most readers aren't going to recognize or care about Kristoff. As such, I don't hold it against this book but I do bring it up as a point worth noting partly because I would prefer that this version of Kristoff not take hold in the comic-reading consciousness in place of his decidedly more competent and badass past self. Oh, and because Kristoff was a member of the Fantastic Four and lived at the Baxter Building on top of having a significant portion of Doom's mind downloaded into him, I'm calling foul on him not recognizing the Fantasticar. Writing the Kristoff you need to make the story work is one thing but this just feels like the writer didn't bother to even consider his backstory when crafting this bit of dialogue. Conclusion: This is a pretty excellent read. The art is spectacular, the writing quick and engaging, and the whole package feels well worth the price of admission. I'm recommending this book despite my reservations about its treatment of Kristoff Vernard. I'm definitely going to be picking up the next issue and I look forward to seeing how this plays out. Kudos to all involved.

She-Hulk #3 is Style Over Substance, But a Pretty Excellent Read