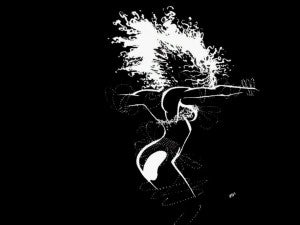 has been playing out its New York Comic Con interview with Sin City creator Frank Miller in pieces ever since, but a couple of key pieces of information have leaked out in the last couple of days regarding the future of the series as a film franchise. First off, yesterday's installment suggested that the script is almost finished. "Robert Rodriguez and I are finishing up the script on Sin City right now and could be shooting as early as this spring," Frank told MTV. Rodriguez had said not long ago that there hadn't been any conversations with the actors yet, but that the way he saw it, the movie had to get shooting in 2012. Hopefully they're starting to look at some actor conversations, though, because MTV's second, more recent development is that Nancy, the exotic dancer played by Jessica Alba in the first film, will return for a substantial storyline in Sin City 2. According to the writer, "Sin City 2 is primarily an adaptation of the book A Dame to Kill For. It also features the short story, Just Another Saturday Night, and two new stories, one involving Jessica Alba's character of Nancy Callahan that I came up with for the movie, in order to tie things together and make it be more united with the first." A Dame to Kill For revolved largely around Dwight, the character played by Clive Owen in the first Sin City film. Both he and Jessica Alba seem to be a bit less omnipresent than they were at the time of the first film, so with a little luck the scheduling conflicts we've all anticipated in getting this gaggle of stars back together won't play in as much as fans had expected.