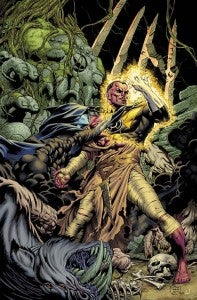 Green Lantern's arch-nemesis Sinestro, a member of the New Guardians and leader of the Sinestro Corps, will get his own, ongoing series in April, Newsarama reports. The series will be written by The Sixth Gun's Cullen Bunn who, fresh off the cancellation of Fearless Defenders, will be taking on a character who thrives on fear. Also, considering that Bunn will start writing a new Magneto series shortly before Sinestro #1 bows, it seems as though maybe he's got a thing for villains. Former JSA artist Dale Eaglesham, who recently drew the Green Lantern #23.4: Sinestro one-shot, will take on the art chores. According to the story, "the new series finds Sinestro desperate having lost everything he's ever loved – his home, family, and his only friend. But his one-time enemy/one-time Sinestro Corps recruit Lyssa Drak reminds him he'll always have fear." Rumors have been circulating that either Sinestro or the Sinestro Corps would get their own title soon; in April, with the end of the Forever Evil event, it's also rumored that some other villains like The Joker or Lex Luthor might get titles all their own.

Sinestro Gets His Own Title in April