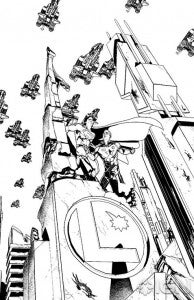 In addition to reappearing in the DC Universe in May, Booster Gold will appear in the May issue of Smallville Season 11, according to DC Comics's May solicitations. And he'll be bringing the Legion of Super-Heroes along with him. The issue before will see Batman and Martian Manhunter working together on a murder in Gotham, complete with something we never saw on Smallville: Martian Manhunter taking on his green-skinned, tights-wearing Martian form. Check out the solicitation for "Argo," the Booster/Legion story, below. SMALLVILLE SEASON 11 #13 Written by BRYAN Q. MILLER Art by DANIEL HDR Cover by PETE WOODS On sale MAY 8 • 40 pg, FC, $3.99 US • RATED T • DIGITAL FIRST An all-new episode begins with "Argo" part 1 of 3! Superman and the Legion of Super-Heroes try to stop war between Earth and a shocking enemy! Plus, a glitch in Booster Gold's Legion flight ring propels the "Gold Standard," his trusty robot Skeets and The Man of Steel into the 31st century.