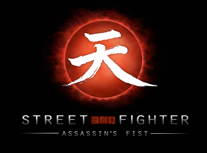 At a San Diego Comic-Con International panel earlier today, Capcom announced that a new, live-action series based on their popular Street Fighter series of video games was coming from Joey Ansah, the director of the fan-favorite Street Fighter: Legacy fan film.

Titled Street Fighter: Assassin’s Fist, Ansah promises that the series "will be what fans have been waiting for. Legacy was a taster; a glimpse of what a live-action Street Fighter should be. This takes the story right back to the start - the origins and motivations of Ryu, Ken, Gouken and Akuma. This will become the definitive back-story from which further epic adventures will follow.”

Street Fighter: Legacy has been viewed over 8 million times on YouTube and received a number of professional reviews, mostly positive. Street Fighter: Assassin's Fist will begin in 2013. Keep an eye on ComicBook.com for more information.