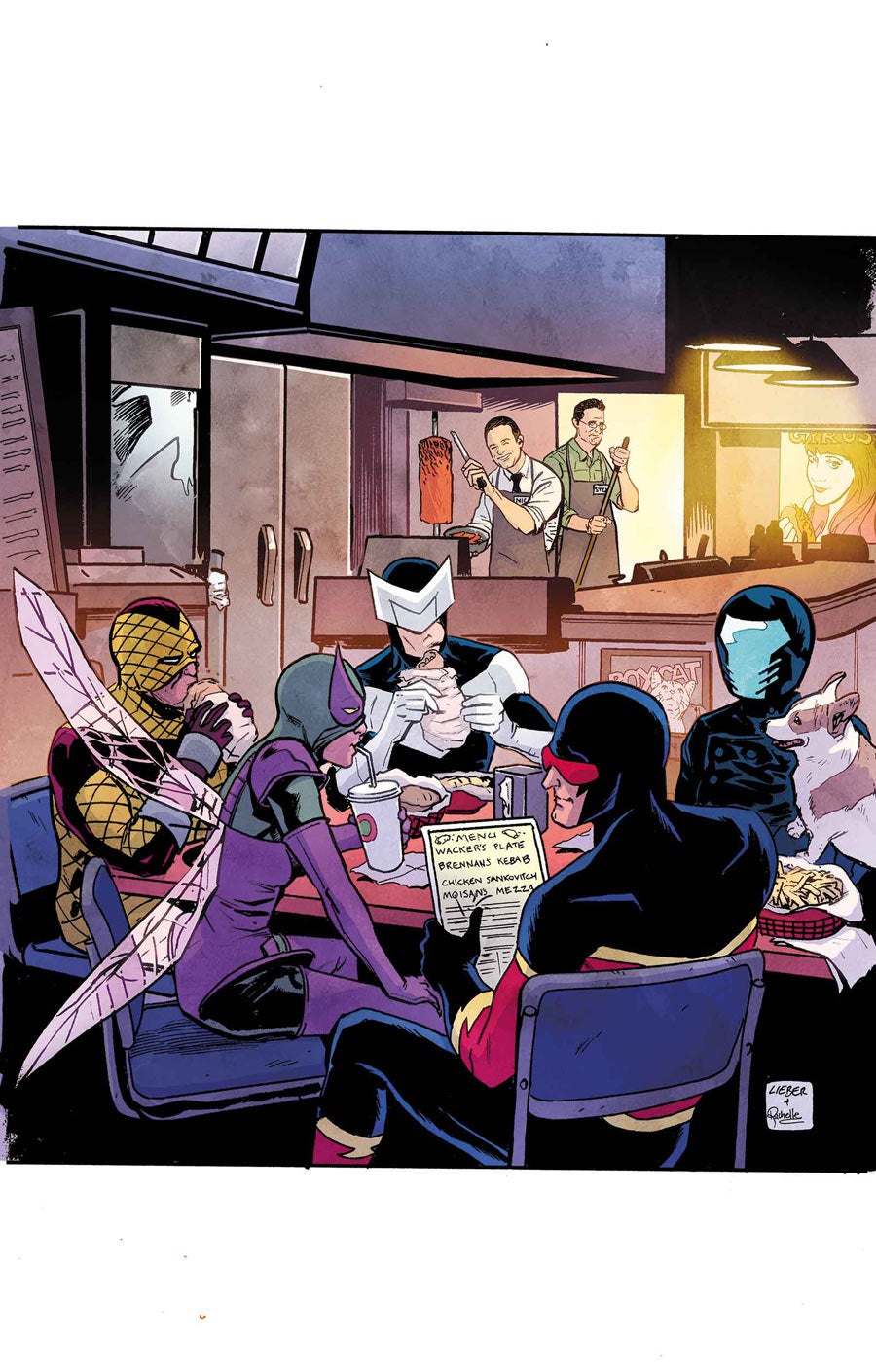 The Superior Foes of Spider-Man #17 is simultaneously the ending that everyone and no one saw coming. The series has been on the chopping block since day one; even its solicits made sure to announce that it wasn't cancelled yet. Looking back it's a miracle that it lasted as long as it did and Nick Spencer and Steve Lieber were able to create fifteen issues together. The fact that the end is finally here comes as no surprise, but the manner in which Lieber and Spencer conclude the series feels like a revelation.

The final issue follows hot on the heels of a gang war between the mobs led by Madame Masque, Chameleon, and The Owl, as well as the (numerically incorrect) Sinister Six. It's a culmination that has been developed from the very first issue and feels like a grand climax in the classic tradition of the superhero genre. Then it's replaced by a different story altogether, Boomerang's story. What at first feels like a dramatic shift reveals itself to be the inevitable outcome of the series. Every twist and moment of exposition is built upon the issues that preceded this one and create an ending that is much more impactful than any super-villain smackdown. Like so much of Superior Foes, the final issue is a gratifying surprise.

Everything Spencer and Lieber built over the fourteen previous issues of Superior Foes made the series appear to be a team book about five criminals who call themselves the Sinister Six. In truth it has always been about Boomerang. The run-down baseball player turned toy-chucking villain known as Fred Myers was always telling the story, instructing the reader on his inner thoughts and opinions. The plans and strategies were always his own and he never left the spotlight of the story for long. In retrospect, he has always been the "hero" of this tale. The idea that Superior Foes was a team book, when it was actually a Boomerang book is a bait-and-switch caper performed by Lieber and Spencer worthy of Myers' himself.

The key to understanding Superior Foes #17 (and all of Superior Foes) is that it's not a story set in the Marvel universe; it's a story being told by someone within the Marvel universe. There's nothing objective or honest about this comic. It's filled with half-truths, exaggerations, and absurdities. This is the story you tell your friends at the bar when you've had one too many and want to relive your life the way you imagined it, regardless of what really happened.

So much of this relies on Lieber's storytelling to create that precise tone. His visual shorthand and the use of obvious visual cues clarify that this is a story being narrated from a specific point of view. Unlike the faux-objective, third person perspective applied to most superhero comics where events are presented by some imaginary, neutral observer, Superior Foes presents itself as a fiction being crafted by someone else. When Boomerang is speaking to his ex-girlfriend, he responds to the slightest glimmer of a chance of reuniting in the most dramatic fashion possible. The space around his head is blacked out and filled with repetitions of the word "hope" in big, bold letters, while two drops of sweat spring from his forehead. It's so overblown that it becomes a very funny moment. This isn't the world, but the world as Fred sees it. Lieber is a master of this sort of shorthand, providing loads of information and landing visual gags with the smallest amount of space. His use of thought bubbles alone inspired an entire column on this site.

It's this same sort of shorthand that allows the complex exposition filling the front half of the issue to avoid becoming tedious. Instead of explaining every detail in a monotonous dialogue, the intricate twists and turns of Fred's plan play out in mini-dramas composed of two or four panels. Each moment is broken down with the use of arrows and some very well placed sound effects. Lieber also recalls panels from the last several issues as well as some from the very first issue. He weaves everything together through the use of clear designs and visual cues, never relying on a big asterisk to steer readers towards the reference. Its his work on the series that allows the finale to be told in a cohesive manner. Fred is able to maintain his own voice and speak normally while the art presents his story.

Spencer provides that clear, consistent voice for Boomerang. It's in his narration and the gags that emerge from his head that you come to love him as a character. That should be a nearly impossible feat. He is self-centered, disloyal, and violent. In spite of all that, Spencer still manages to make it clear that Boomerang is a human being. His monologues, presentation, and jokes humanize him and, against all odds, make him likable.

It's not a matter of discovering what's true and false in this narrative. The narrator is far too unreliable to make that anything but a fool's errand. Even Fred admits that he made half of this story up. The core of Superior Foes is finding out what this story tells us about its narrator. It asks the all important question: what kind of man puts a boomerang on his forehead and robs banks?

It's the kind of man who's full of equal parts bravado and crap. It's the kind of man who will do everything to make you hate him and then reveal that glimmer of gold inside his heart. It's the kind of man who'd rather go for his dream (no matter how silly) and lose than accept the hand he is dealt. This is every bit as silly and crazy as every issue of Superior Foes, but Fred Meyers is the guy you want to be when you're down on your luck with nowhere to go. He is an inspirational loser who you can look down upon and up to at the same time.

The Superior Foes of Spider-Man ends here. It was a comic filled with attitude, gags, and heists all told with inimitable style, and now it's gone for good. That finality serves as a fine conclusion to the series though. This was never a comic about winning. It was a comic about losing and being too stupid or too romantic or too strong willed to accept that. Spencer and Lieber created fifteen of the best issues published by Marvel in years because they recognized it's better to be a loser who tried than a winner who played it safe.

Avatar: The Way of Water Falls to Third Place at the Box Office, Knock at the Cabin Claims Top Spot