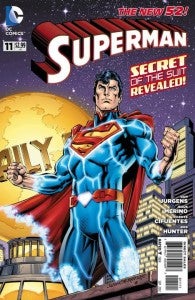 Following on the heels of San Diego Comic-Con International, somehow or other our copy of Superman got lost in the shuffle. Generally we hold interviews like this for weekdays, but we wanted to get this out live as quick as possible. Dan Jurgens sat down with us to talk about Superman #11, his second-to-last issue on the series. Now, first of all--on that cover, I've never noticed that there's so much glowy-ness goign on with the belt buckle. Is that something that plays into how the suit works? That was an addition for print. If you look at the solicitation art, it wasn't like that. I always envision the effect as emanating from the "S" Shield and working it's way down through the suit. Why the intermission with Anguish before pursuing the submarine angle? In general, the idea was to start a subplot in the Anguish storyline that would build to its own story. Hey look! It's Lois' boyfriend! Was having him show up here just a question of where he fit in with other stuff going on? 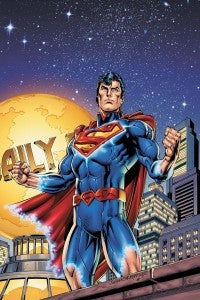 More a question of the fact that George introduced him in SUPERMAN #1 and it's a relationship DC wanted to maintain. From our perspective, one of the things that Keith and I talked about is that the guy not be a jerk. I don't think Lois would make a habit of building a relationship with a louse, and we talked about him having to be a decent guy. Edge shows up, too--it looks to me as though Lobdell is going to head in a bit of a different direction. Were you looking to bring a little closure to the stories you, Keith, George and Jesus have been telling? Yeah. Carlini's makes an appearance here, and the Bogdanove Bridge, too. Some callbacks to your first run on Superman! Has the Bog bridge been referenced before? Carlini's had, of course, whereas Bogdanove Bridge is new. I thought it had a nice sound to it and thought, "Why not throw a tip of the hat Jon's way?" I grew up at a time when one of Lucy Lane's defining traits was her blindness. Any idea what went into the decision to jettison that aspect of the character? I think there's a general idea that, as part of the New 52, Lucy moves in a different direction. That's true of a lot of characters, which is fine. There's been a little somewhat more broad humor in the Clark Kent stuff--his stuff in the newsroom in previous issues, and then the whole thing about picking up the check here. Was that a conscious decision to bring the book some levity, and/or to separate the tone and feel of Clark from Superman? Not every comic should have an aspect of levity. Nor should every comic have a completely dour atmosphere. However, I do think that human life has a mixture of both and I generally like to work that in to SUPERMAN. Let's face it, the guy can fly, move mountains and fight aliens, all the while maintaining a normal, everyday life. There has to be a huge component of humor that becomes a part of that. Lucy doesn't really remind me of Lucy anymore; there's something about the way she's drawn here that makes me feel like she's more peers with Lois & Clark than she used to be. Is that a fair assessment? Kind of like what you've done with Jimmy? Yes, it's safe to say that we did want to take the "Jimmy approach" and make her more of an equal. Bungee jumping? Is it just me, or is there a potential bit of hilarity involved there when the cord breaks and Clark doesn't get hurt? Well.... that could be, I suppose! I just think it's fun to have someone telling Clark that he'll finally get to get a taste of what it's like to fly. There's a bit of irony there. Sadly, Morgan's strategy of mining smaller reporters for their best details and then letting the crap roll downhill onto them if the story doesn't pan out is all too realistic in journalism today.  All you have to do is look around to see what's happening in the world today. For me, there is no difference between MSNBC and Fox News. They exist to enflame with half-truths and distortions, at best. They're bomb throwers who don't worry about collateral damage. 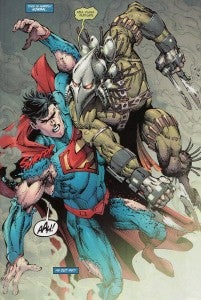 So "The Story of the Suit!" was really just a panel verifying what we already expected about its origins. Was that something that DC just said, "We're going to call THIS the issue where the suit is explained, make sure to drop something in there!"? Could be. Writers don't write cover copy-- or at least, I don't. On that same line, is something like allowing the suit to be damaged something you have to run by DC editorial? I know the cape is invulnerable, but that's substantial damage to the suit in a pretty short window of time. Every story is "run by" DC Editorial. That's what editors do. So, yes, that happened in this case. On that short window of time, do you think a quick, brutal battle like this is better or would you have liked to have more time to flesh that fight out? Every writer would like more pages! Well, usually, anyway. But I'm generally satisfied with what I had here because I wanted it to have a real "quick strike" feel to it. What's with the Predator hair? I've really only seen that look on Lobo and Massacre before in the DCU. I thought it was an interesting look. More than that, I can't say.

Superman's Costume Through the Ringer: Dan Jurgens on Superman #11

That '90s Show Gets Season 2 Renewal at Netflix