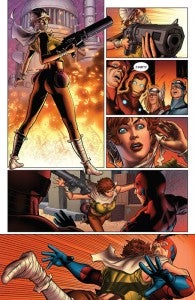 This week, Brian Michael Bendis bucked the recent trend of dissolving character marriages (see also: Spider-Man, Superman, Black Panther and Storm) by bringing back Janet Van Dyne, also known as The Wasp and best-known as the wife of soon-to-be movie hero Ant-Man. That probably tells us something about the tone of the Ant-Man movie, which is likely to be a bit more romance-heavy than other Marvel films...and it almost certainly tells us something about FF, the title that Ant-Man is going to star in as part of the Marvel NOW! relaunch. Down the street, though, DC Entertainment went the other way with Superman. In Superman #13, while everyone was paying attention Clark Kent quitting his job at a great metropolitan newspaper, Lois Lane was texting with her boyfriend, Jonathan Carroll, about their plans to move in together. It's an interesting dichotomy, and one that says something about the companies' priorities moving forward, it seems; while Marvel is trying to embrace its history and move forward with it--their reboot isn't even a reboot--DC continues to run from their past. The Superman-Lois marriage is not as sacred as some supporters have made it out to be; after all, it's not as though the characters were even married for most of their publishing history. Often, they haven't even dated, and it's probably worthwhile when you're exploring younger, more innocent versions of the characters to look at that aspect of them. Still, there's something larger-than-life and iconic about Superman and Lois; it's one thing for them to date someone else, but to treat them like real-world people who have relationships that progress quickly, where they sleep with other people and live with other people...that's likely to raise some fan hackles. That said, it's almost certainly a commentary on what they plan to do with their movie, as well: Lois and Clark, more gritty and realistic, at each other's throats at work and in another's bed at night. Then, miraculously, together at the end. Fade to black, roll credits. The choice to put Hank and Janet back together is an interesting one, too; it's fraught with storytelling potential (and it's almost a pity he didn't move on and start dating before she returned, although one supposes Marvel have already explored that dynamic with Cyclops before), and could be a great way to move the couple beyond the "spousal abuse moment" in time for Ant-Man's movie. Played right, this can change their entire relationship dynamic and help make them one of those rare things in comics: a truly stable couple. Of course, in the movies, that could be boring; Tony and Pepper already have that pretty nailed down.

Wolfboy and the Everything Factory Clip Introduces a Surprising Friend (Exclusive)