Superman Unchained #9 is a release that has been deservedly hyped by DC Comics and the comics press. Despite the notable delays, it's a comic from two of the most highly acclaimed creators working not just at DC Comics, but in all of American comics: Scott Snyder and Jim Lee. It's a big conclusion with lots of splash pages, action, and twists. The issue feels like a blockbuster film translated to the comics page and works perfectly fine on that level. The problem is that it purports itself to be something more than popcorn entertainment.

Superman Unchained #9 works well on its surface, but Snyder and Lee are clearly reaching beyond simple entertainment to say something about both the character of Superman and, by extension, morality. Anything more than the most superficial analysis of the issue reveals the ideas here to be hollow. This ending postures as an important statement, but what it has to say is often superficial and, occasionally, hypocritical.

The problems all stem from Superman's position within the story. Snyder is clearly interested in questioning what makes Superman a moral icon, poking and prodding at how he functions and makes decisions. He also places Superman at the center of the narrative. It is his story and he holds the positions of moral compass and hero. Superman's behavior is always shown in images and words to be heroic and right. In the same manner, Lex Luthor is always treated as the villain. It is his classic role and Snyder allows him to maintain it with authority. The positions of hero and villain are never questioned, so the actions and speech of these characters are read as what is morally correct or incorrect. They act from a position of authority as the greatest examples of a modern hero and villain, and are consistently presented in that manner.

That dichotomy creates a potent palette to speak about morality. It's a simple formula that can be treated with near infinite complexity as revealed in stories like Grant Morrison and Frank Quitely's All-Star Superman. There are a couple of obvious ideas that spring from Superman Unchained #9. It informs us that sacrifice for the greater good is noble and that heroes never give up.

This is popcorn morality though. These aren't concepts that inspire or surprise. There is no bravery or complexity to these statements. It's about as obvious as saying good guys do the right thing. Snyder (through the machinations of Lex Luthor) places Superman in a position where only he can save the world by sacrificing himself. It's a hackneyed position with no real decision required, especially in the superhero genre. Of course Superman would choose to sacrifice himself in order to save an entire planet. Nothing about that choice reflects anything new about the character or the ideals he represents. This is the central moral decision of the issue and all of Superman Unchained, and it only works when left unexamined. 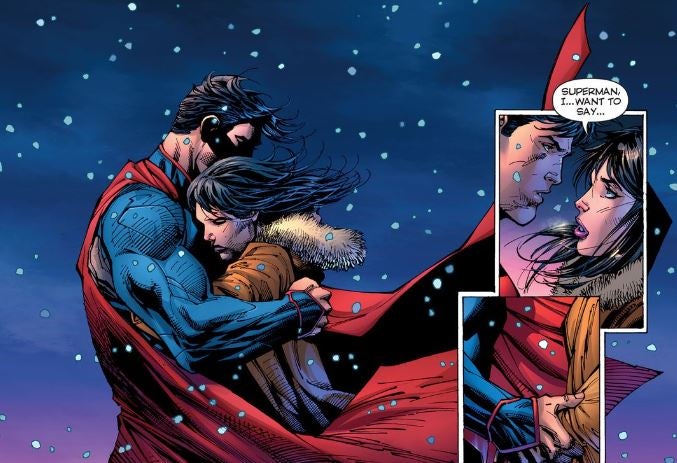 The setup for this decision helps adds some complexity. Superman's choice to fly into space and give his life is juxtaposed with a farewell to Lois. He tells her that he is sacrificing himself because it is what she would do. That moment helps to characterize his motivations and reveal that he is inspired by humanity as much as he inspires humanity. The love story between Clark and Lois is revelatory because Lois comes to represent the best of us. She is the key to showing that Superman does not perceive himself as being greater than ordinary people, but as a partner to them. The scene is impaired by the loss of the love story. Superman is supposed to be in a relationship with Wonder Woman here, so Lois chooses to say "Thank you" instead of "I love you". This feels awkward because every part of the scene, specifically Lee's compositions of the two together, reveals them to be intimate. They are shown to be in love, but the dialogue is constrained by an adherence to the continuity of the New 52.

Whereas the setup for his decision helps add some significance, the manner in which he is released from it removes any gravity from his actions. The manner in which Superman is saved from sacrificing himself is telegraphed by the very nature of his predicament. There is one obvious solution that allows both him and Earth to survive, and it is exactly what occurs. Superman's willingness to give his own life is still significant, but the outcome removes him from the action and removes the importance from his posturing and choices in these final moments.

The real trouble in Superman Unchained #9 comes in examining his decision and what it means. The alien invaders are presented as a nameless, faceless armada of spaceships. Yet they are definitely still living, sentient beings. Wraith is one of them and he has been revealed as a character with a rich, inner life. He is capable of compassion, logical thought, and emotional growth. By extension, every alien in the invading fleet is capable of the same. Superman's choice to self-destruct in order to destroy their fleet would result in the death of thousands of aliens (and that's a low estimate). 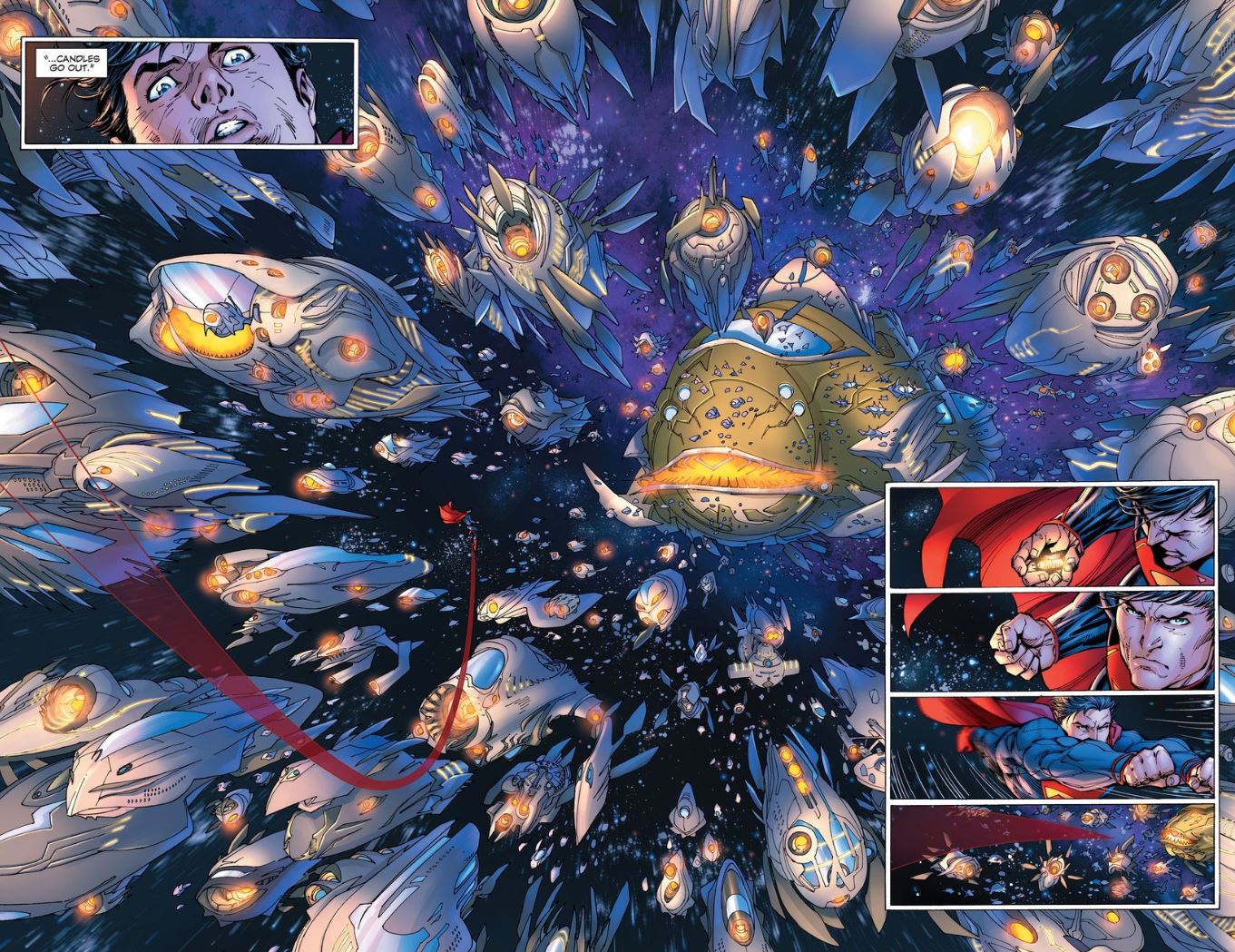 Superman's immediate acceptance of killing a massive number of living beings as the obvious and best solution is troubling. At no point is the morality of this choice called into question or undermined. It is not presented as a troubling necessity, but as the inevitable, heroic outcome. Even if Superman is ultimately absolved of the action through another's intervention, his utilitarian choice to kill thousands in order to save billions remains. At best this scene appears to promote a utilitarian philosophy as a morally brave one, ignoring the troublesome nature of mass slaughter in space. In a far worse, but entirely valid, interpretation it could be read as promoting human life as being of greater value than any other form of life, nationalism on a galactic stage.

Perhaps even more troubling is that this is not even Superman's idea. It is one presented by Lex Luthor that he readily accepts. The heroic action of Superman is not a terrible, brave decision by the hero, but the hero's acceptance of the villains plans. If what Superman does is morally correct, then it follows that Luthor is the mastermind of humanity's salvation and that salvation comes through necessary bloodshed. If what Superman does is morally incorrect, then he's a bumbling idiot who is easily manipulated into attempted mass murder. 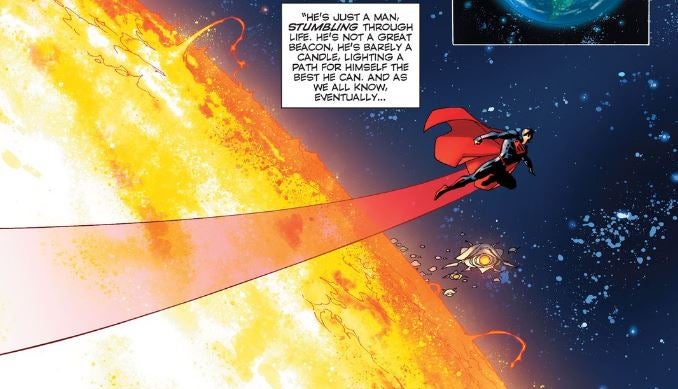 Luthor presents Superman to his friends as the second option. He reveals a pattern of trial-and-error where Superman tries to do the right thing, then evaluates the consequences after the fact. The fact that Luthor is presenting this pattern as a problem places it in the position of being morally desirable. Luthor is the villain and his hate for Superman is obviously a hatred for what is right. Yet the pattern he presents is deeply troubling.

Superman is not just testing out different methods of rescuing kittens from trees or putting out fires. Luthor specifically mentions trying to depose a dictator and seeing what happens as a result. It is a presentation that forgives the Iraq War as long as the intentions of those involved were pure. Superman is not held responsible for the consequences of his actions since he is trying his best and possesses no special knowledge. Snyder's basic idea seems to be that Superman is no better than the rest of us, which is a nice enough sentiment. The broader meaning of this scenario is morally outrageous though. The message is that only intention matters, that it is okay to act as long as you believe you're doing the right thing and learn from the result.

In Superman Unchained, Superman really is the bumbling idiot that Luthor portrays him to be, but his good intentions are enough to forgive any mistake. Superman is held to the same moral and ethical standards of a six year-old while still being treated as the inspirational, moral center of this entire story.

The strangest part of all this is that it's set against a flashback that bears out an opposing set of ideas. In a story depicted by Dustin Nguyen, young Clark accidentally lashes out at man who is going to kill his mother and apparently kills him. He is distraught at the result of his actions. Even as his mother attempts to forgive him, he rejects her mitigation of what has occurred. Nguyen and colorist John Kalisz sell this scene. It is wrought in muddied reds that make it read like a horror story. The notion that young Clark has killed a man is entirely believable here. 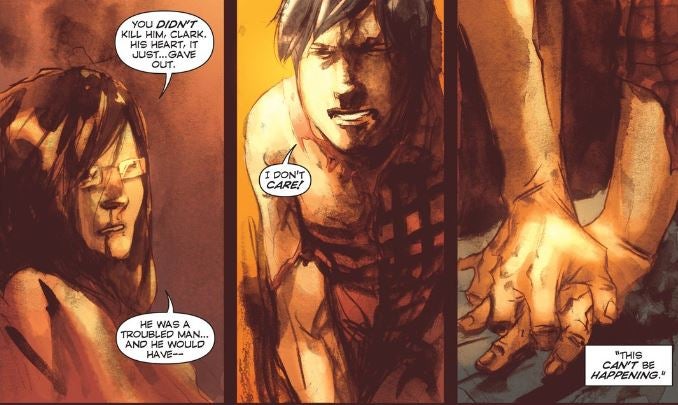 Rather than accept his actions or forgive himself for the man's death, Clark continues to perform CPR until the man returns to life. Presented with what would normally be considered an acceptable outcome justified by self-defense, Clark rejects the outcome and does whatever he can to find a better way. Somehow this younger Clark is more interested in holding himself to a higher standard and finding better solutions than his adult self. The only way in which this flashback mirrors the main plot of Superman Unchained is to reveal that the grown Superman is a morally weaker version of his younger self. Where young Clark refuses to surrender or become a murderer, Superman accepts the villain's plan to kill an invading army and does his best to act it out.

That's not to say Superman Unchained is without merit. Lee and Nguyen's work here is outstanding. That message is being borne out by other critics though and is self-evident given the body of these artist's work. The problems found within the story of Superman Unchained is too obvious and too troublesome to not be drug out and examined though. If this were a simple action romp, perhaps it would be easy to ignore, but that's not the case. It has been presented as an "important" Superman work from significant creators. It's a comic that treats itself as being significant. Given any sort of serious examination, Superman Unchained #9 quickly falls apart. It is revealed to be a calorie-free romp that hides very ugly moral positions beneath magnificent artwork.

Superman Unchained #9 is Beautiful, but Hollow and Morally Disturbing