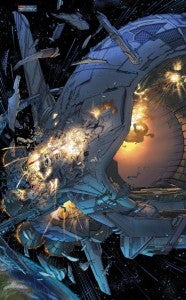 DC Comics have finally released a first look at the fold-out poster that will be included in next week's Superman Unchained #1. Featuring art by Jim Lee, one side of the poster features Superman attacking what looks to be an invading spacecraft and the other side--one we've seen in penciled, black-and-white art before, is a splash page of Superman in the guts of the craft. Given the nature of Man of Steel and the alien menace that will face Superman in the film, is it possible this is a Kryptonian craft? Unlikely, but don't totally discount it. 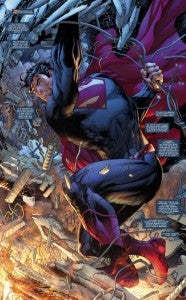 Here's DC on how the poster (literally) fits into the story: "Measuring a full 11.6875" x 18.875" in size, this poster isn't just a pair of blockbuster images, it's actually part of the story. But don't worry. It's also designed to be removed and displayed, allowing the first issue of Scott Snyder and Jim Lee's new comic to live on after you've finished reading it."