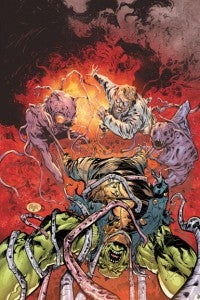 In today's solicitations for the "Dark" group from DC Comics, it was revealed that Rotworld, the multi-part crossover story between Scott Snyder's Swamp Thing and Jeff Lemire's Animal Man titles that's been teased literally since the first issues of their series, will begin in October's Frankenstein: Agent of S.H.A.D.E. #13 and that Frankenstein's book will remain a part of the story for three months. Batman villain Poison Ivy will also participate in the story, which will feature Beast Boy, Justice League Dark and Deadman, among a number of other guest appearances between the three titles. The crossover will be separated out into three somewhat regimented mini-stories that all tie together, presumably to aid in collecting the books without having to break the barriers of being "Animal Man Volume 3" or whatever. Animal Man will feature Rotworld: The Red Kingdom and Swamp Thing will feature Rotworld: The Green Kingdom, while Frankenstein: Agent of S.H.A.D.E. will be titled Rotworld: Secrets of the Dead. Animal Man writer Jeff Lemire recently left Frankenstein: Agent of S.H.A.D.E. in order to jump on Justice League Dark. Matt Kindt, writer of Dark Horse's Mind MGMT and a personal friend to Lemire, took over the book from him, so it's entirely possible that Lemire had planned to incorporate Frank into the story all along, and that when Kindt came aboard the title he knew this was one of the first stories he would be telling. The title has been consistently one of DC's best-reviewed books, but many fans expect that it will be cancelled with DC's next round of new title announcements because it's selling below the level that Justice League International was cancelled at. With a little luck, perhaps a tie-in to one of the most eagerly-anticipated DC events of the year will help perk up sales.

My Hero Academia Cliffhanger Kicks Off the Anime's Final Act

Girls5Eva: Peacock Exec Does Not Regret Series' Move to Netflix