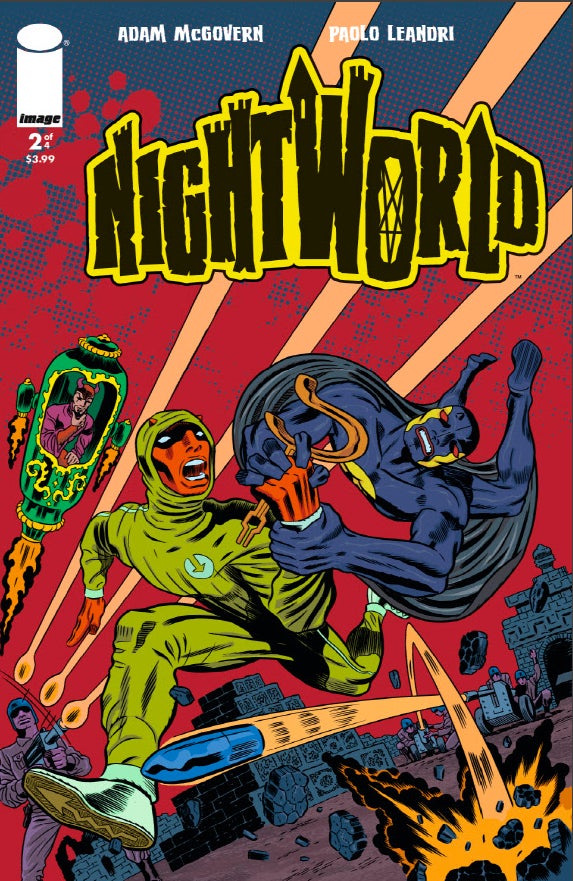 Nightworld by Paolo Leandri, Adam McGovern, and Dom Regan has quickly become a cult hit. The mini series from Image Comics follows the morose demon Plenilunio as he quests for the mystic Soul Key that will allow him to wake his sleepwalking lover Lidia.  It’s a pop-art horror tale that mixes kinetic Kirby aesthetics with a kind of new-school approach to pre-Comics Code Authority horror comics sensibility.

One issue in and already Nightworld has carved out for itself a niche unfilled by any other book on the stands. With the second issue imminent (check out our preview after the interview), I talked with Paolo and Adam about all things Nightworld:

Paolo and Adam, for those who don’t know, what is Nightworld?

Adam McGovern: : And nothing is more important than that! But Nightworld is also a reliquary of my regrets about human reactions to trying circumstances, a treasure-chest of Paolo’s and my passions for midcentury pop culture, and an open vault of our ambitions for how fun and adventurous comics can be.

PL: I created Plenilunio about twelve years ago. In my conception it should have been the most mainstream comic conceivable, to bring me out of a big nothing; now reading the reviews it seems it has turned out as a cult book for few adepts, not so few I hope!

AM: Paolo first showed me the prototypical pages for a story then called “Plenilunio” in 2004 — it so possessed me that I though we had to adapt it for America (it was lettered in his native Italian). The demon took control of us for an expanded story we were compelled to tell — “bat”ting ideas back and forth, dare I say :-), from Paolo’s strong premise.

Paolo, tell us about your drawing process. What materials are you using, and is there a particular set up of tools that you like to use?

AM: I feel obligated to add that Paolo does his art from start to finish; pencils, inks and indeed lettering. Only our color-artist Dom Regan also approaches this master canvas!

What's the collaborative process like between you all? Adam, do you give Paolo a full script for an issue or is it a more open ended back-and-forth process?

PL: Our collaboration on this is quite multiform; the plot of the first issue is mostly mine and of the last one Adam's; the two in-between are the result of some sumo fighting between the two of us!

AM: Yes, Jacob wrestling the angel (and we’re not sure which one is which :-)).

Paolo created the whole storyline of Issue 1; I think all I added was the scene where Plenilunio experiences a tragic flashback (readers will know which one I mean). We did a great volley of ideas for Issue 2 and 3 (often involving Paolo conceiving the events and me suggesting the settings), as well as one character we briefly meet in Issue 2 that I added.

In Issue 3 there was a castle-invasion scene that Paolo switched literally on the drawing board to something that readers will find horrific and hilarious if they stick with the story — and that called for as fast footwork on my part with the scripting as we see Hotspot apply in the situation.

Paolo created all the characters but the one I hint at above, and I named all of them except Plenilunio, Lidia and Lotus, as well as me coming up with the title “Nightworld” — Paolo invented such an intriguing cast it’s good to have an ensemble title where we can rotate them into the spotlight. As Paolo has said elsewhere; his original plot for Issue 4 called for more of a climactic battle, but we agreed on a dramatic confrontation of our characters with their own greatest fears instead — which you’ll see has just as much intensity, and almost as many explosions :-).

What most excites you two about this project? What is the most challenging?

PL: My greatest excitement is seeing the reaction of the people; I have not published much [recently] and had really missed this feedback.

AM: I agree — connecting with readers is a thrill, and discovering that our blend of indie eccentricity and blockbuster production values can flourish and find fans across the spectrum from “art” to “pulp” comics. The challenge, for me, is venturing out into each new unknown zone of creative discovery and confronting each area of painful personal perspective that you can convert to a story that goes beyond it, while being true to what many people hopefully feel. But that’s true of every comic or other writing!

The book has a nice mixed sensibility that's a good mix of Jack Kirby aesthetics and pre-code EC horror comics. What would you say are some of the big influences on this book, both in the writing and the drawing?

PL: Beside classic comics of the golden and silver age, also the moodiness of old horror movies, from early Universal to Mario Bava gothic thrillers.

AM: The elegant spookiness of Mexican vampire movies of the late 1950s and early 1960s cast a strong shadow on the “voice” I heard in my head for this book, as well as the poetic narration from, believe it or not, undersea documentaries by Jacques Cousteau in the 1970s. I also always loved the few times the Stan Lee/Jack Kirby Fantastic Four would visit their family nanny, Agatha Harkness, in her haunted house, and Paolo nails that mix of sleek adventure and sinister mood. My Jewish background feeds into Grandpa Lowe’s character pretty literally, while less directly, the idea of the “dybbuk,” the mischievous demon, probably has a lot to do with the impish evil of Underboss’ dialogue (while his look I might guess Paolo evolved from movies like F.W. Murnau’s Faust).

Are there any other projects from you two post-Nightworld that you can tell us about?

PL: We have tons of stuff, if you think that Nightworld is weird wait ‘til you see those!

AM: And hopefully not wait too long! In the Magic Bullet comics newspaper published in Washington, D.C. you’ll see the one-page origin I wrote for Paolo’s dystopian-future cowboy character Kid Luger (who we have a 31-page story ready for, written all by Paolo and teleported into English by us together). On HiLobrow.com you can read the first two stories of my also-dystopian swashbuckler Idoru Jones (whose look and exploits and whole era were visualized by Paolo) — and then it’s off to several other worlds (including the NIGHTworld again not long from now we hope)!

What are you two reading/watching/listening to these days that has you really excited or inspired?

PL: I like punk/new wave music of the late ‘70s and exotica of the ‘50s, hip-hop and Eurodance of the ‘90s. I’ve already read everything from the silver and bronze age and now I’m discovering golden age comics; I like movies from silent to Italian giallo [crime fiction] of the ‘70s, noir, ‘50s SF, classic Hollywood melodrama, and any kind of classic horror.

I feel a scarce attraction to modern stuff, except for Allred, Mignola, Arthur Adams and some others, but recently I’m starting to look around to see what's going on; I suggest to everybody to read Grotesque by Italian Sergio Ponchione.

AM: I loved Ponchione’s own scholarly, spacy silver-age homage Ditko Kirby Wood, it was like a lecture on a hovering space-time machine platform with the world’s coolest teacher. On TV I love the tribal morality plays of Boardwalk Empireand the sophisticated despair of Mad Men — the mix of dark murder and retro style fits Nightworld well. Not all heroes are fighters, and I like the fearless wit and social transgression of Amy Schumer’s sketch comedy show…and am really looking forward to the Agent Carter series, to get back to strong women characters who are literally kickass.

In music I like the gleaming, airborne pop of Supermajor and the evangelical darkness of The Tall Pines — another mix that matches Nightworld. For comics, I love the neo-pop-art of Allred & Slott’s Silver Surfer, as well as Waid, Samneee & Rodriguez’s Daredevil. I’m elated at the folkloric sassy envelope-pushing of Gillen & McKelvie’s The Wicked and the Divine, and can’t wait for Kelly Sue DeConnick & Emma Rios’ Pretty Deadly to start back up — that book is like one long hallucination of what reality is really about.

Fred Van Lente is doing some of the most fascinating work of his career on Magnus: Robot Fighter, taking us into an everyday, disorienting existence that encompasses fundamental yet eye-opening concepts of civilization and self-awareness between humans and our proliferating electronic familiars. And I’m counting the days ‘til Jen Van Meter’s Doctor Mirage and Ann Nocenti’s Klarion start — the preview of Mirage was suspenseful and heartfelt, and Nocenti will pack Kirby’s “witchboy” with premium crazy! 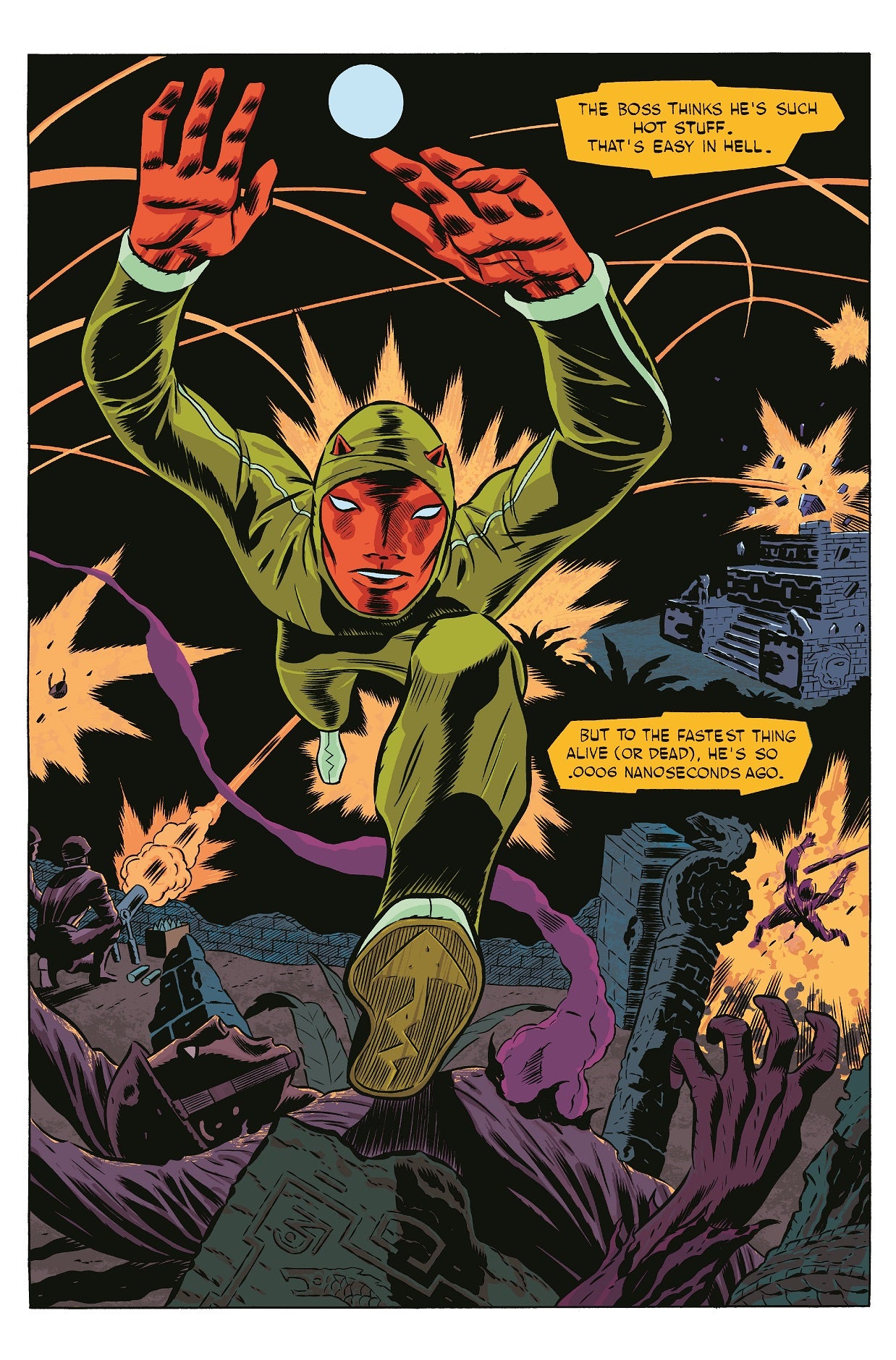 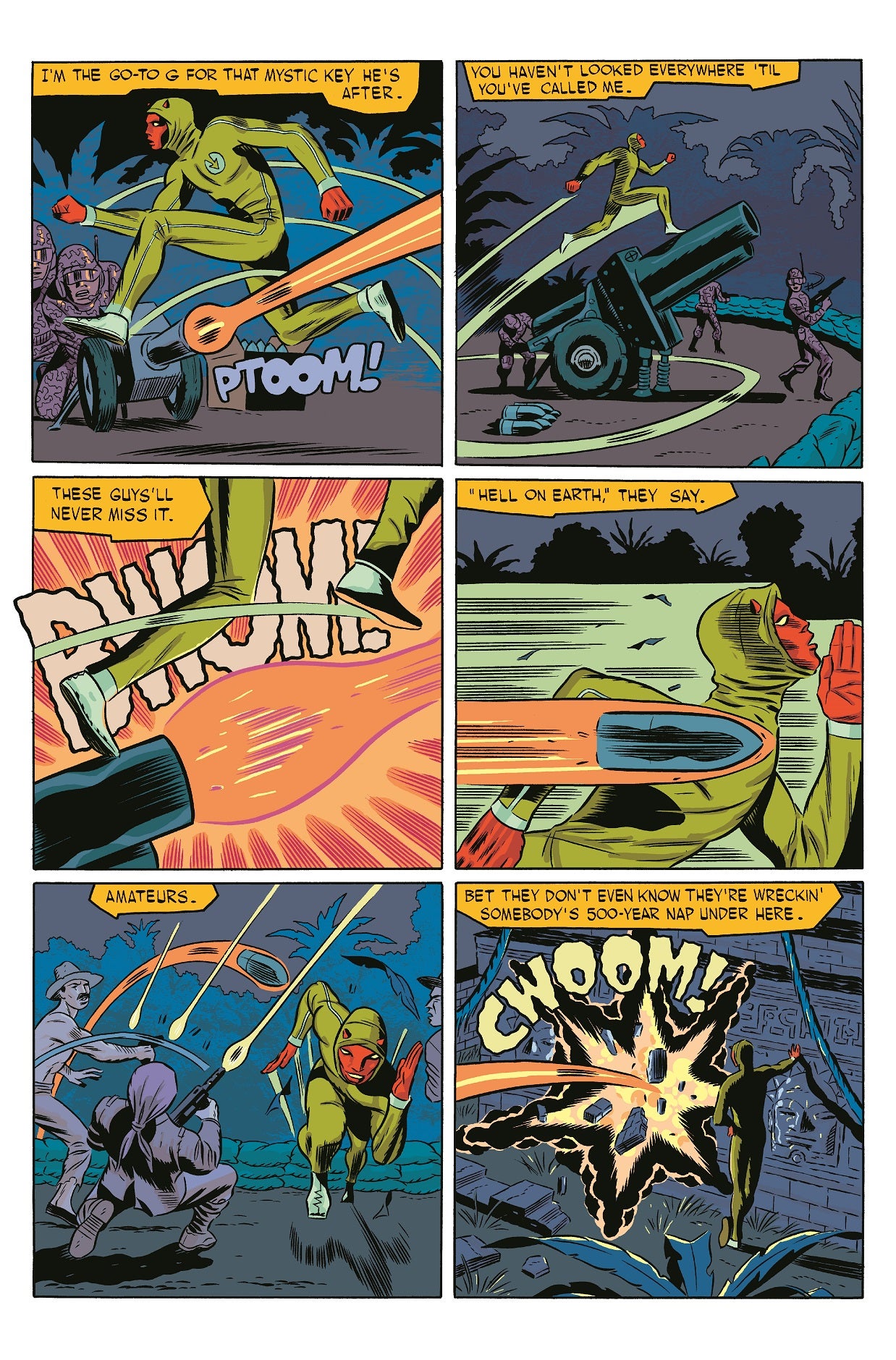 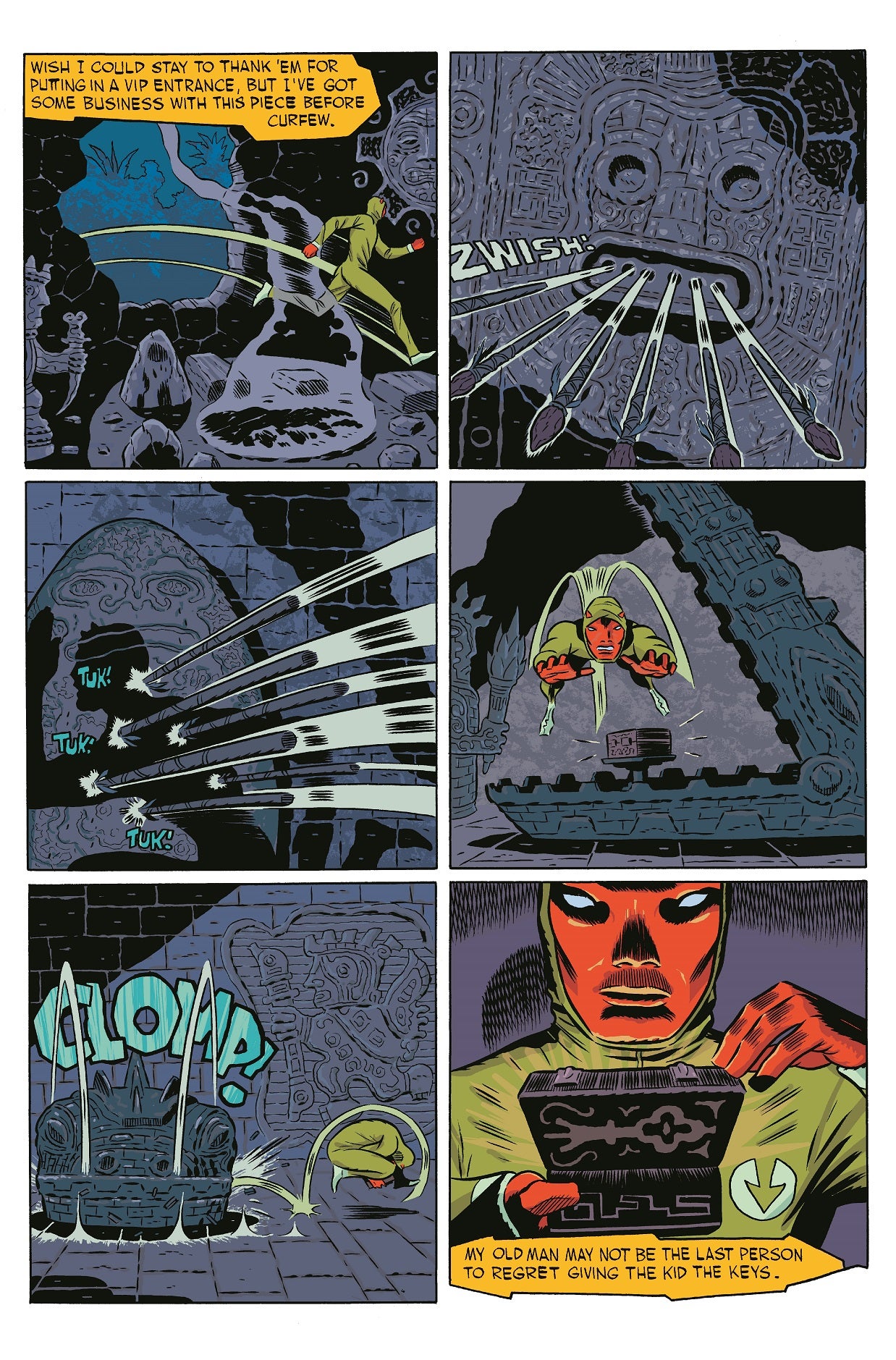