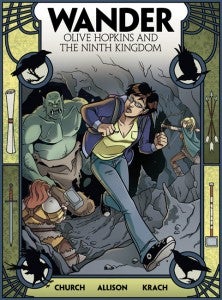 Kevin Church and Grace Allison's Wander: Olive Hopkins and the Ninth Kingdom is a terrifically entertaining book, if our review didn't make that clear. A blend of genres with humor, heart, strong characterization and a simple, lovely art style, the book is bound to be a favorite with anyone who checks it out on ComiXology, and should have a nice life in the bookstore market when and if they decide to print some collected editions. Church talked to us a bit about how the book came to be and what made he and Allison decide on Monkeybrain. First off, I suppose: What drew you to Monkeybrain? Monkeybrain sought us out. I had brunch with Chris Roberson and Allison Baker at New York Comic-Con last year and I half-pitched the series to him while we were having some very nice mimosas. I had no idea that Monkeybrain Comics was going to be a thing, only that I had an idea and I wanted to know what they thought of it. Well, I guess they liked it. What's your relationship with Grace Allison? Obviously it's a creator-owned book and you're the co-creators, but how much did she get into plotting and you get into character design, all that? I went into Wander with a pretty clear idea of how I wanted these characters to look — and I'd actually worked with a few other artists when were were thinking about making it a webcomic — but Grace really crystallized things immediately.. I'm very lucky to work with her because she manages to all of the art chores herself. In fact, she'd been coloring Chris's Memorial series at IDW and Allison mentioned that she was a really terrific artist and that we should talk. Grace and I clicked very quickly and her sensibility is perfectly attuned to what I'm doing. As far as division of labor goes, it's pretty much I write, she draws at the moment, but I've asked her "Well, what do you want to draw?" a few times and I'll try to work that into the scripts. She's also come up with little details that I'd never thought of that have influenced things. How frequently are you and Ms. Allison going to try and get Wander into readers' hands? We're aiming at monthly. I'm midway through #3, she's drawing #2, but it may end up slipping more towards an every-six-weeks thing if she gets more paying coloring work. Creator owned means, unfortunately, that we don't get paid until after the fact. I pointed this out in my review; Monkeybrain seemed to make a conscious effort not to have two books in the same genre in their initial launch. I think yours will almost inevitably lead to comparisons to Amelia Cole, even if the similarities are pretty shallow and surface-level. Did you know that there was another book with a similar premise being published by them before you finished the first issue? I had no idea until the books were out! Chris and Allison were so busy with the launch that none of us got to see each other's work and I've got to say that I'm totally fine with how everything turned out. While yes, they're both books with real world people and fantasy interacting, Amelia Cole (which I really, really enjoyed, by the way) is like Wander in as much as Scrubs is like M*A*S*H. Amelia's much more in control of her situation and Olive is dependent on outside forces, or so we think. The real similarity is that we're both going to be nominated for multiple Emmys. (That was kind of a hint.)

The dialogue in this issue is great, and a lot of the stuff that makes it work is the way Olive and the other characters bounce off each other. Where do you draw the line, in terms of deciding when the Shakespearean vs. modern English will be a barrier? This is one of those weird non-answers, but characters talk the way they're supposed to. I just always know when someone "sounds" right versus wrong. For example, Shalwyn avoids contractions and probably sounds like Charlize Theron — elegant without being too haughty, if you know what I'm saying. I never really considered writing the dialogue for the fantasy characters in any way that would be difficult to parse for a modern audience. That's one of the strengths of A Game of Thrones — Martin's characters all have distinct voices (even if they're very expository sometimes) and their dialogue translates pretty well on-screen with little in the way of massaging. How important is New York to the story? I mean, obviously at least one of you has spent a good deal of time there, since the dialogue that references it seems pretty right-on, but the one exterior scene in the city is one of those things that could happen anywhere, seeing as it's just outside a corporate location. I love New York (if you couldn't tell) and Olive is definitely a product of it, but we're not going to be seeing much of it for at least the first two years. (I hope we are doing this for two years.) How far along are we going to be before we get a solid answer in terms of how Olive arrived here from her bed? The first arc is going to be eight issues long. We might get a reveal at the end of this arc, or maybe the end of the next one. There's a whole secondary theme I want to address that I can't go into without spoiling the story, but there is a longform arc planned. Were there any particular influences on this story? I'm feeling a little bit of similarity to stories like Tellos, but that could just be a very general high concept thing like the Amelia Cole thing. Not that I can think off from the top of my head, but I've always been attracted to outspoken female leads in genre works. You know, I don't know if it's an influence, but did you ever read David Hahn's Private Beach? I loved that, and it started off as a fairly standard late-90s, early-00s slacker comedy before some really odd, Lynchian stuff started cropping up. That's the sort of thing I've always responded well to and I'd love to see him get back to that title sometime. In fact, it seems like it'd be a natural fit for digital. Are you going to get ASCAP on the phone and lock down the rights to that "Bella the Very Fine Whore" song? I'd buy the single. I'm talking to the two guys from the Black Eyed Peas about that right now. Maybe getting Afrojack on the remix, guest vocals from Nicki Minaj. What's the deal with the whole skipping DVD thing? That panel prompted me to actually e-mail Allison at Monkeybrain to make sure it was on purpose. That's part of the story. That's all I'm going to say about that. We're definitely using guided view to our advantage there, and that's one of the things that's really attracting me to ComiXology. One of the first things I did with this series was to figure out the iPad's dimensions and proportions and create a basic grid that allows the comic to look great as a page and go into guided view without breaking up the user experience. That Hergé style of panel composition allows you to be dense and readable in more than one way. The evil knights look a little bit like Staggy, the Boyscout Slayer. And that's awesome. Hang on, let me Google that. [twenty minutes pass] You're right, except, uh, I am pretty sure we're going to avoid beheading or gutting any boyscounts in Wander. I hope.