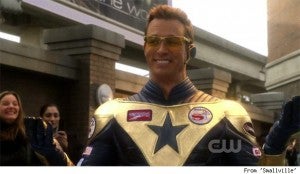 Last night, we talked to Dan Jurgens, the creator of Booster Gold, about how he would approach writing the announced Booster Gold TV pilot. Today it seemed like it could be fun to take a look at how I would approach the series. For readers unfamiliar, I wrote a column for years called The Gold Exchange. Published by Comic Related and Newsarama, it followed each issue of Booster Gold's ongoing, monthly comic (which started after 52 and ended after Flashpoint) and served as a kind of running commentary on the issues by the folks I interviewed, including writers Geoff Johns, Jeff Katz, Dan Jurgens, J.M. DeMatteis, Chuck Dixon and Rick Remender. 10. "Dancing girls in every episode"  OK, so maybe not literally--but Dan Jurgens had a point when he said that Geoff Johns's take on the character in Smallville had embodied Booster pretty well. If there's going to be a Booster Gold series and, presumably, minimal-if-any involvement by the rest of the DC Universe, he'll have to get his own supporting cast. This opens up the door for his commercial side to really take center stage, building a group of agents, promoters, employees and and hangers-on who could make up the core of his 21st Century support network. 9. An acknowledgment of the DC Universe Granted, DC characters are valuable properties in their own rite and there's not a ton of chance that we'll see most of them appear as a supporting player in Booster's story. Still, what's to say he can't at least acknowledge that he doesn't wear a cape anymore because "the Big, Blue Boyscout took it away from me" or referring to that time he made a pit stop in the Old West to drink a famous gunfighter under the table? Subtle nods to continuity often work better in a fairly low-budget show than actually trying to present the stories alluded to onscreen anyway. 8. Follow Vol. 1's Formula Too much origin story in the pilot would be a mistake. There's a lot of really cool stuff you can do with Booster's backstory, but I'd be in favor of starting with Booster already in his costume, in the 21st Century, and filling in the gaps along the way, as Jurgens did in the first volume of Booster Gold in 1986. 7. The Space Museum That said, when we eventually see the Space Museum, I don't want it to just be some back alley outside where we see Booster shoving his stolen weaponry into a duffle bag along with Skeets. Have a little fun with the place! It should be one of the coolest sets you'll ever build, so building it a few episodes later in the series should let it live up to that. Making it a big part of the pilot would just put it in competition with Booster's costume, the Time Sphere and other things which require a hefty initial investment. 6. Special Effects Granted, it's Syfy and there's only so much you can do on an episodic TV budget, but there were wild variations (sometimes within an episode) in terms of what they were able to do on Smallville. I say less is more, as long as the "less" looks cool and believable. As an extension of that" Let's see a cool and believably futuristic take on his costume. The Smallville one looked OK, but really was just another of the many "guys in jackets" superhero costumes on the show. 5. Humor Many readers came to Booster for the first time as a result of the Keith Giffen/J.M. DeMatteis Justice League run of the late '80s. The superhero sitcom became a staple of fan libraries and many of its references and images endure. To try and play Booster Gold too straight would be a death sentence for the show, especially considering that mainstream, non-comics viewers really only know him from his appearances on Justice League Unlimited and Batman: The Brave and the Bold, where he was mostly played for laughs. 4. Rip Hunter, Time Master Not only did Rip play a minor role in the first volume of Booster Gold (he invented the Time Sphere, then later helped Booster repair it to get back home briefly), but in recent years he's become a major supporting character in Booster's stories and (spoiler alert)was once revealed to be Booster's son. Alone, he probably wouldn't draw enough of a bid to make selling his rights separate from Booster's a boon to Warner Brothers, so with some luck hopefully we'll get to see Hollywood's take on the Booster/Rip dynamic.

3. Skeets At least Smallville made some effort, with an off-camera Skeets built into Booster's costume (which is all we've seen from Booster's bionic sidekick so far in the New 52, as well), but if you're going to make a whole show that revolves around Booster, Skeets is a must, in all his golden, football-shaped glory. He could also provide comic relief by bouncing off Booster or playing down Booster's ego during tense or action-packed scenes where it's not really appropriate for Booster to do so himself. 2. Balance I want to see a Booster who's got a sense of humor and doesn't take himself too gravely seriously--but I also want my Booster Gold to be the Greatest Hero You've Never Heard Of. And there's an audience for both of those, so it's probably necessary in order to satisfy comics fans that you balance the approaches in order to make a TV pilot work. Assuming that the pilot is bought, you'll have just that one shot to win over both network heads and the fans needed to make the show a success--so bringing this balance to the character and the show, and thus keeping as many viewers happy in that first 45 minutes or so as posible, is key. 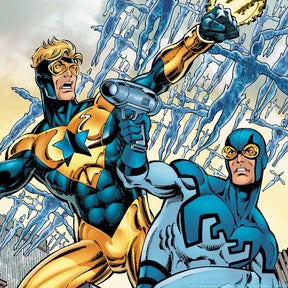 1. Ted Kord With the popularity of Jaime Reyes on the most recent Batman cartoon and the New 52 establishing him as the world's first Blue Beetle, the likelihood of seeing Blue Beetle II fighting alongside Booster Gold on TV is basically zero. But does that mean Ted has to be gone? He could work for Booster Gold, Inc., and be Booster's inside tech guy--clearly something a jock would need when his powers are technology-based--or one of the sponsors who slaps a label on Booster's suit. Just because he can't be Blue Beetle doesn't mean he can't exist--at least on TV, that is. ...and as far as casting? How great would James Roday (from Psych) be as Booster Gold?