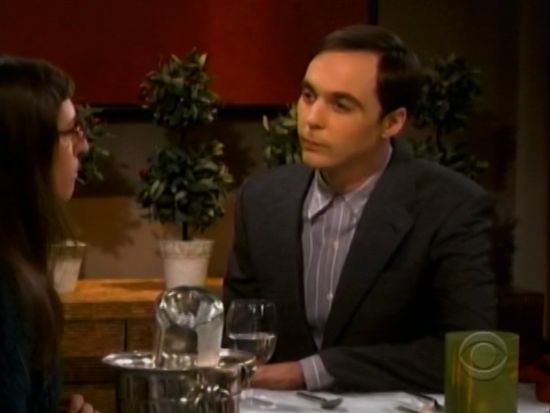 The Big Bang Theory is never short on comic book references, and there was a great one on the sixth season premiere of the show tonight. Amy Farrah Fowler had grown disgusted by Sheldon Cooper's complete lack of romance on their anniversary date, and she threatened to leave him if he didn't say something meaningful and from the heart. Sheldon looked at Amy and said, "When I look in your eyes, and you're looking back in mine, everything feels not quite normal. Because I feel stronger and weaker at the same time, I feel excited and at the same time terrified. The truth is I don't know what I feel, except I know what kind of man I want to be." Amy responded, "Sheldon, that was beautiful." To which Sheldon replied, "I should hope so. That's from the first Spider-Man movie." Some viewers were probably left wondering if Sheldon was just making a joke or if that really was a quote from Spider-Man. Well, it is actually a quote from Spider-Man, but not an exact quote, as Sheldon left the ending sentence off. In the first Spider-Man movie, Peter Parker actually says that quote to Mary Jane as what he told Spider-Man about her. Peter Parker said, "I said, um, Spider-man, I said, uh, the great thing about M.J. is when you look in her eyes, and she's looking back in yours, everything feels not quite normal, because you feel stronger, and weaker at the same time. You feel excited, and at the same time, terrified. The truth is you don't know what you feel, except you know what kind of man you want to be. It's as if you've reached the unreachable, and you weren't ready for it."

New Frontier Would Be the Perfect Foundation for DC Studios' DCU