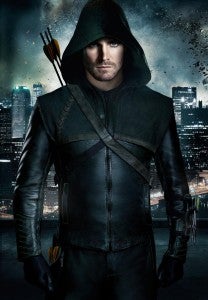 In a question-and-answer session with fans today, Arrow producers Geoff Johns and Stephen Amell revealed that classic DC Comics villains The Royal Flush Gang will appear in the sixth episode of the series, tentatively titled "Legacies," reports Green Arrow TV. Actor Currie Graham will play King, according to the show's co-writer and executive producer Andrew Kreisberg, who is also writing a pilot based on Booster Gold, a DC character often associated with the Royal Flush Gang. Don't expect the Gang to be the over-the-top caricatures we've seen in the comics, especially in Justice League International and Booster Gold, in the past, though; Arrow's producers say they're trying to make a version of Green Arrow that's inspired by Christopher Nolan's grounded take on Batman in the Dark Knight Trilogy. "You'll see with the Royal Flush Gang, that the dynamic of the family, and the iconography of the playing cards are going to be there, without the supernatural bent. I think we've come up with a really clever way to portray them in a more grounded, realistic world," Kreisberg said. "The Royal Flush Gang are in episode six, and we're really proud of that episode. We think it's one of the most successful attempts at alchemy that we've performed. The Huntress is pretty much straight out of the book because she's such a grounded character, but the Royal Flush Gang were the most outlandish villains from the comics, but they turned out to be our most grounded villains, and the relationship that Oliver has with King, the leader of the gang, we're really proud of it. He's played by Currie Graham, who is a tremendously talented actor." Arrow debuts on Wednesday.

The CW's Arrow Will Face the Royal Flush Gang