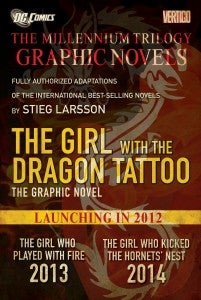 DC Comics announced today on its blog The Source that they have obtained the rights to publish authorized adaptations of Stieg Larsson's runaway bestseller The Girl With the Dragon Tattoo and its sequels, The Girl Who Played With Fire and The Girl Who Kicked The Hornets' Nest, collectively known as the Millennium Trilogy. The series will be published through DC's Vertigo imprint, mostly known for its mature reader and creator-owned stories. Vertigo has had a great deal of success outside of comics's direct market as the publisher of acclaimed titles such as Sandman, Y: The Last Man, Fables and American Vampire. The graphic novels will be made through a partnership with the Hedlund Literary Agency. Hedlund has a substantial presence at this week's Frankfort Book Fair, which began this morning and runs until Sunday. DC will likely discuss the project more at this weekend's New York Comic Con. No creators have yet been announced for the project, although it's possible that such an announcement will be made by DC before the weekend is out. One might assume that such a popular licensed property would draw big-name comics talent to the adaptation, but between DC's focus on their recently-launched New 52 initiative and the fact that licensed properties have a spotty history with both DC and their crosstown rivals Marvel Comics, it's difficult to say. Recent forays into licensed properties for Vertigo have been The Fountain ,written by filmmaker Darren Aronofsky and drawn by painter Kent Williams, a relatively unknown commodity in comics; and Neil Young's Greendale, by established comics stars Joshua Dysart, Cliff Chiang and Dave Stewart. "Stieg always liked comics and it will be exciting to see the unforgettable characters he created come to life on the comics page," Larsson's brother told The Source. The writer himself died unexpectedly in 2004 and was never able to see the success of The Millennium Trilogy, which has already become a popular film series in Sweden and will make the jump to American cinemas in December under the direction of Fight Club and The Social Network filmmaker David Fincher.

The Girl With The Dragon Tattooed Man? DC Comics Gets Stieg Larsson Novels