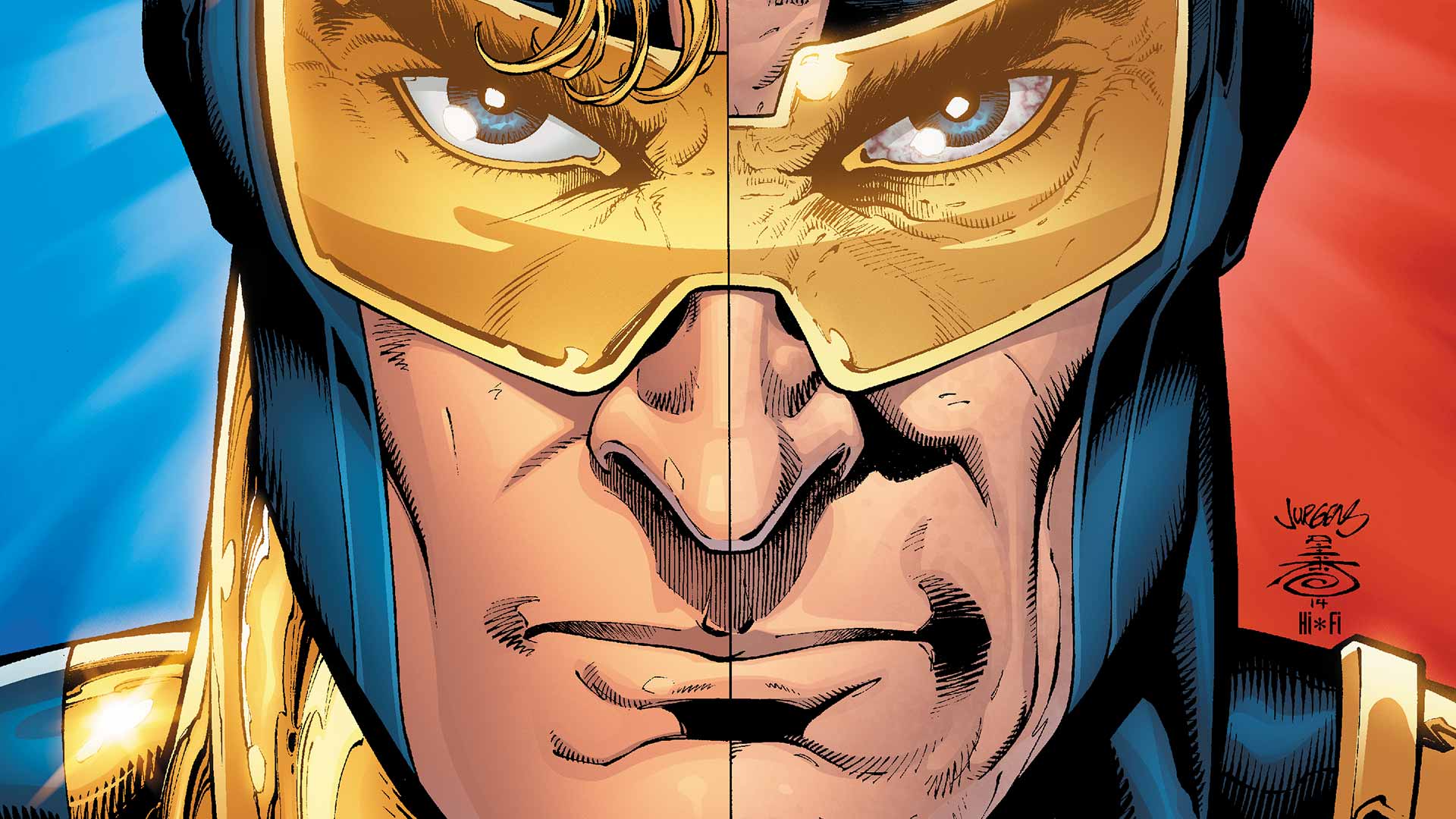 Today saw the relase of Convergence: Booster Gold #2 -- and we hadn't even had a real deep dive into #1 yet with writer/creator Dan Jurgens!

Well, fear not, dear reader: The Gold Exchange returns yet again -- in spite of the fact that almost every time it feels like it could be the last -- for Convergence: Booster Gold #1, and a conversation with Jurgens about the past and future of Booster Gold, Booster Gold (the other one) and the DC multiverse.

Reminder: This is a SPOILER-HEAVY interview. If you haven't yet read Convergence: Booster Gold #1 yet, go buy a copy and read along with us. 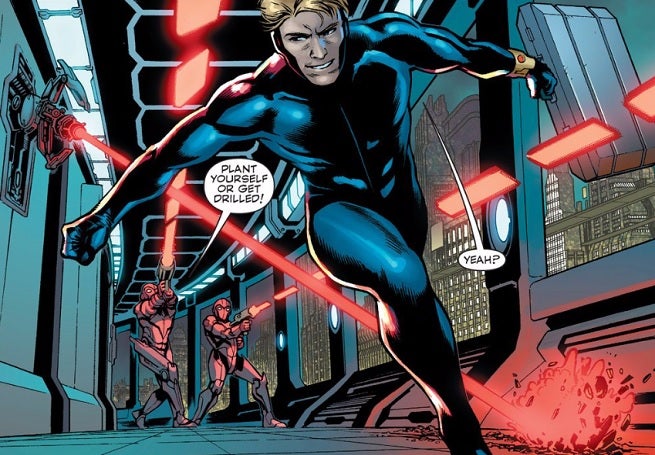 Did you give Booster a whole new origin story for this book?

Yeah, it absolutely is. I think part of that is because when we launched the New 52 and would have seen BG as part of the JLI, we never got into really the idea of, is there any difference to this character? Is there a radically different origin?

So what I wanted to do here was, yes, by all means, let's show the New 52 Booster's origins if you will. Let's see him in the time he came from and put a different spin on it. It's not like we did a total overhaul but obviously in the way he gets Skeets and everything, we see a bit of a different path from Booster. 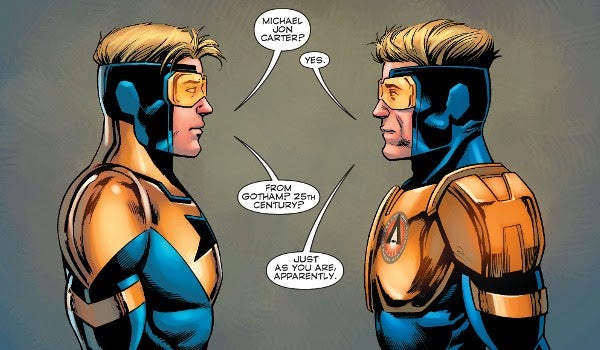 When we see the pre-Flashpoint Booster, not only does he have this different backstory but the new Booster is aware of all that. It gives him an interesting relationship; he almost has hero-worship of himself.

A little bit, yeah. I also think part of that is related to the age difference that we see in #1. But I think it was a way of saying that you've had one guy sort of complete his career in very successful fashion, if you will. That he did a lot of interesting, important stuff and that he mattered. 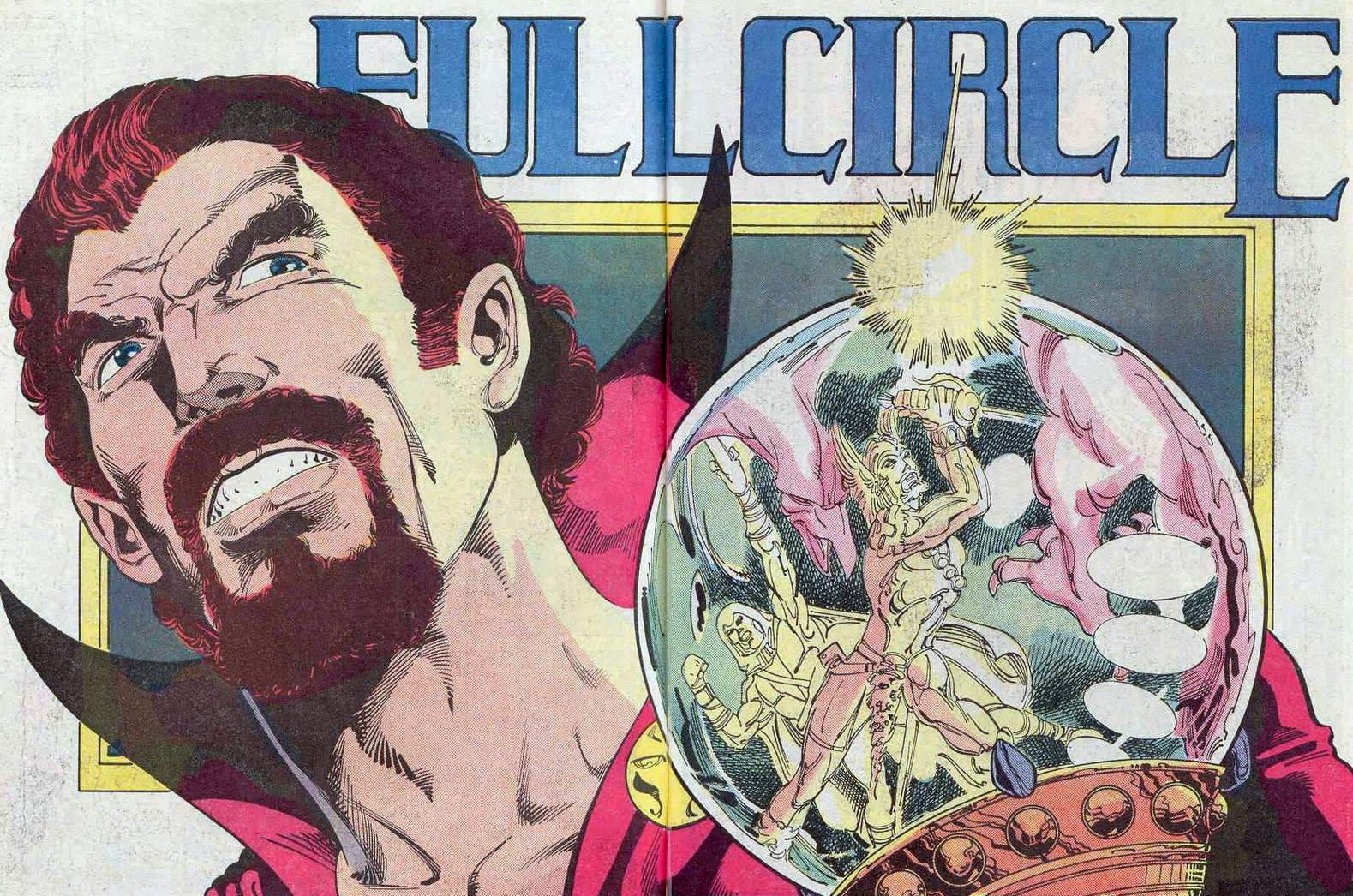 It's interesting to me that this series is kind of a watershed moment for you. Booster is one of the characters you're most closely identified with, and it looks like classic Booster may be put to rest. Meanwhile, they're fighting Deimos, one of the first villains you drew professionally.

It's weird because it wasn't purposely intended that way. We knew we were going to do a two-part BG Convergence story. And as I started to figure out how it was going to fit in and what it was going to do, they let me know that they had come up with the idea of putting Skartaris on this planet and having Travis Morgan and Deimos and company there, and I just said, "Oh! Well, I've got to use that."

As I put it together, I did say one or two times that I was diving way too deep into flashback territory for me. 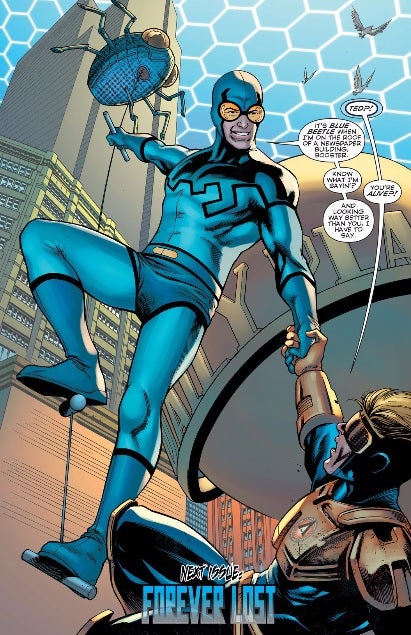 The dialogue made me wonder: At the end, are we actually back on the pre-Flashpoint Earth? Because the dialogue was so humorous that it almost felt like the Giffen & DeMatteis earth.

No, it is not the world where Ted never died. Part of it is, you have to understand that for Booster, he could see different versions of Ted in different universes and in all of them almost have that same reaction. That's the weird thing about a multiverse is that he could have that kind of reaction. But no, for all intents and purposes, this is the Justice League International Ted if you look at that Convergence book and this is the Ted that was his friend.

It's kind of strange sometimes because you have the Zero Hour versions and you have the pre-Flashpoint versions of characters and they feel very similar because they're both post-Crisis.

Right. And they have the same experiences. They are in many ways the same in their experiences, their memories and stuff like that. They are essentially the same characters in terms of what they've done and such.

Whose idea was it to go with the original Booster logo from the '80s instead of the one from Volume 2?

It's really odd: I'm not 100% sure. I assume it was Dan [DiDio]. It's weird -- all of the facets of a book's production that you're involved in, no one has ever asked me about the logo. And all of a sudden, a book hit my desk a couple of weeks ago and I saw that and I actually mentioned to Marie Javins, I don't know who went with the old school logo, but that was awesome. I haven't asked directly but I imagine it was Dan.

Yeah. In the story, it got complicated, but I like to think that I made it clear enough for people to latch onto. 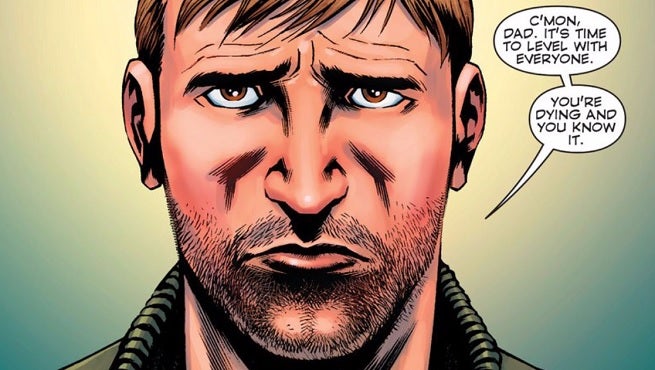 How long has the idea been in your head that older Booster is dying?

It's weird -- and I say it's weird because often ideas don't have a definite beginning, middle and end -- but if we go back somewhat, there were various times where we talked about what the effects of time travel might be on someone. And Dan and I had casual conversations about that. That even led a little bit to the idea that at one point recently here you had Booster Gold bouncing through time, unable to control it. So that concept of chronal radiation was always sort of there.

I think we started to deal with that as a core idea based on where we're going with issue 2. So it's something that is going to have some ramifications going forward. 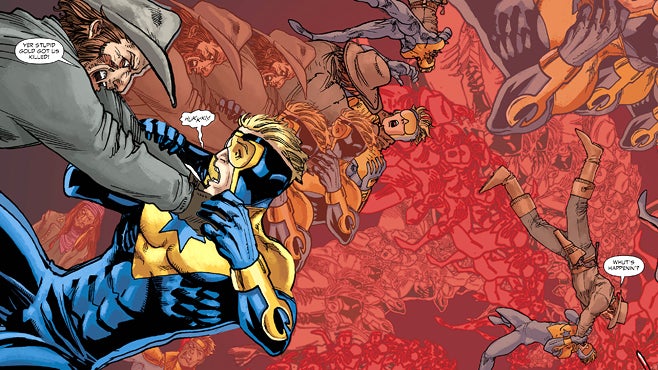 Do you have in your head an explanation for the All-Star Western thing? Was that taking place on Telos?

Whenever it gets into a case like that, I always want to avoid providing that explanation for every little thing that happened under the sun. I felt very comfortable addressing what the Booster Gold Five Years Later book was becuase it just came out last summer. To go beyond that? I don't know how much the fans know and I wanted to make this as accessible as possible to people who were picking up an issue of Booster Gold for the first time. So it was streamlining it more.

In my head, I've always thought of it this way, and that is after Justice League International, Booster got kind of caught in a time vortex where he was bouncing through time. That would have included the events of the Justice League International Annual. And then from there, he kind of appeared in Booster Gold five years later. It's almost as if he could have gone straight to Telos after all that happened. That's just a classic case where rather than break things down, you take things at face value. You saw Booster in Justice League International and then you saw him in All-Star Western and then all of a sudden in the Five Years Later book, one could say that yeah, he bounced through time and then ended up on Telos.

Back when we were doing lead-up interviews for this, I remember asking you whether Booster would finally find out that he was Rip Hunter's dad, and you said no because it wouldn't be fair to new readers. But in the issue, that's actually one of the first things Rip says to Booster. But because it's a multiverse story, Rip was very dismissive of Booster's follow-up concerns because it was like, "Well, it wasn't you, so who cares?"

Yeah. I think it's pretty clear that he's a little more confident and self-assured. He knows what he's doing.

This is the first time people have seen explicitly in the books how time travelers manifest this difference in the dome.

Part of it would begin to suppose that all time travelers travel exactly the same way, or at least through the same conduit as they travel around. In this one, what we're saying in terms of Telos and the domes, is that when Booster appears, all of a sudden people's powers returned. We didn't get very deep into the mechanics of it but it all goes back to him being a chronal anomaly and carrying this chronal radiation.

If you go back to the Booster Gold Five Years Later issue, for example, he appears in 30th Century Metropolis and Tharok and Validus are there, and they say "Our powers have returned!" And what we made clear is that Booster is there and whoever is there gets their powers back, at least for a brief moment. That's because he's a chronal anomaly that in essence starts to negate some of the other power of the dome itself, which is also time-based. I mean, we're saying that this place exists outside of time and space, that time doesn't really pass in the same way under the domes, that kind of thing, so there you have it.

Which could easily tie into how Skartaris is such an important element of the story.

How many phone calls have you had to field recently for Zero Hour stuff? Not only are there ten Zero Hour comics being published, but you also drew that splash page for Justice League.

[Laughs] It's just weird sometimes the way things coalesce and for whatever reason, things like this start to blend together all at the same time. That's sort of what happened here, and all of a sudden it was Zero Hour. It's weird how that goes. It's always nice to know that you did something years earlier that people still feel like it's worth touching base on.