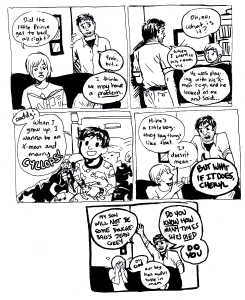 While Aquaman, one of the most maligned characters down the street at DC Comics, has a top-tier creative team working on his book and recently starred in a Robot Chicken special, all of which seems geared at enhancing the value of the character as an intellectual property and countering the notion that he's a joke, Marvel's perennial punching bag not only turned evil, killed his father figure and got arrested...but now Reddit is making fun of him, too.

In this clever, one-page comic posted to Imgur and picking up steam on Reddit, a little boy tells his father that he wants to marry Cyclops when he grows up. That worries his parents--but probably not for the reasons most people would expect.

The Hilarious Avengers vs. X-Men Epilogue You'll Only See Online