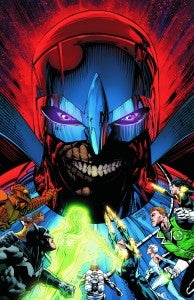 The first arc of Dan Jurgens and Aaron Lopresti's Justice League International ended this week with the action-packed fifth issue of the series. Featuring a baffling cover by superstar artist David Finch, the story saw the fledgling team facing off against Peraxxus, an interstellar miner and businessman with a penchant for destroying planets and killing all their inhabitants with the help of the Signalmen, a group of massive robots buried deep within the planet, centuries ago, for reasons unknown, by someone who is not Peraxxus.

The first full calendar year of DC's New 52 initiative starts off with a bang, and it's Booster Gold and company's job to try and contain that bang.

All the while, the UN-backed team has at least one person back at headquarters watching the whole thing and rooting for them to fail (or, at least, die--one would assume they weren't actually rooting for the team to fail in the sense that the whole planet got blown up).

As always, series writer Dan Jurgens joined us to talk about the issue, what's in store for the team in the year to come...and what's with Booster's new costume, anyway?

The International Exchange: I'll start with the hard, and obvious, question: Who's that girl on the far right side of the cover? It doesn't look like Lady Godiva.

Dan Jurgens: There's a very good answer for that.

It's a mistake. A screw up.

She shouldn't be there as she wasn't yet due to appear in the book. Given  the amount of people who look at these things, I have no idea how it ever made it all the way through to print.

IX: The colorful displays by the Signalmen: Do they mean anything? My initial guess was that they were earth, fire, wind and water elementals although it's equally likely, I suppose, that the colors represent the powers of the emotional spectrum and various Lantern Corps. Or the desire to be visually interesting.

DJ: Totally the desire to be visually interesting AND separate one from the other in order to keep locations separate from one another.

IX: In spite of their having Darkseid in their opening arc, you managed to beat Geoff and Jim's main Justice League title to the cool, visual punch of showing the earth spewing energy like the fire pits of Apokolips. Well played!

DJ: Well, I don't know about beating anyone to the punch.

We wanted to start off with something big that would really test the team and I think we did that.

I think we have plenty more to come.

IX: If Peraxxus has the power to disintegrate matter and reintegrate it however he likes, why is it necessary to “mine”? Is it a matter of alien planets having unique items that he couldn't think up on his own, or does he just need a way to obtain the actual mass?

DJ: I wouldn't say he integrates it "however he likes" it. He is able to reintegrate it to a fairly pure form, without the dirt and crud that might have accumulated on some of it.

It's also important to note that it isn't a power of Peraxxus' per se, but something his ship did, presumably through computer engineering and programming.

IX: Is it bad that Guy Gardner's choice of ring construct made me a little nostalgic for Booster Gold's previous mode of spherical transportation?

DJ: No! That was rather intentional!

IX: It never dawned on me until just now: Is that W-shaped gold patch below Booster's cowl intended as a kind of visual homage to the now-absent collar he used to sport? There are a couple of panels this month where it really looks like the original '80s collar (pre-Justice League and the huge, disco look).

DJ: Jim Lee is the one who added that so you'd have to ask him. I always assumed it was a design element that's meant to accentuate the star on his chest.

IX: Hey, since somebody asked—where ARE the Justice League and Superman? Is the answer to that question important, or is it just an acknowledgment of the difficulties of writing a book with earth-shattering (literally) consequences in a shared universe?

DJ: That's an age old question in comics, whether it applies to the Titans, Justice League, Fantastic Four, Avengers or any other super team.

That pat answer was always, "They were off in space."

I don't want to resort to that so let's just say... they were busy.

DJ: Yeah, I'm having a lot of fun with Godiva and we certainly plan to explore her further. She has some nice scenes coming up in issue six.

IX: Guy is, as most readers know already, a good but deeply flawed person. Was it a conscious choice to give Godiva flaws here that would set off Guy's?

DJ: I don't know that I consider Guy deeply flawed.

I want Godiva to be someone who humanizes these extraordinary people.

You know, we constantly put these characters in space or other dimensions; have them face incredibly powerful foes that endangers their lives and very rarely does anyone say, "Holy s--t! That sonuvab--ch has the biggest-ass ax I ever saw and he wants to kill me with it! And we just traveled through the cosmos to get here!"

Seriously, how does anyone really acclimate themselves to that, especially when they're experiencing it for the first time?

IX: Mari's observation about Batman echoes something that Giffen and DeMatteis used to say about the original Justice League International: Readers who thought the bickering and the humor and the more grounded characterization meant the characters were somehow lesser heroes, or didn't understand the stakes, were fundamentally misguided. It was years later, though—after the characters had already suffered a good deal of damage in the eyes of the readers—before they made that point explicit on the page. Were you trying to evoke that message a bit here by indicting (gently) Batman in the same way that Judd Winick (via Booster) indicted Power Girl in Generation Lost?

However, the most capable among us are often the ones who lack patience or understanding when others can't equal them in approach and temperament.

IX: “Ring power is insufficient.” It's a very practical way to say, “Even with a Green Lantern here, things can still get ugly.” As a writer, is it more fun to work with Green Lantern: Rebirth's latter-day reinterpretation of the ring charges, as opposed to the old 24-hour rule where the ring just worked like magic until it didn't?

DJ: Yes, it is. The 24-hour thing always felt artificial.

If I put new batteries in a flashlight and leave it on, it'll be dead in a few hours. If I leave it off, I can still turn it on a year from now.

IX: Between Godiva and Aquaman, it seems that heroes with powers that appear on their face to be...less useful...are really asserting themselves a bit in the world of the New 52. Was that a part of a conscious plan to make every character the best they could be, or just the way the drama played itself out when you were writing this issue?

DJ: I can't speak for anyone else-- only the way I approached Godiva, which was to give her some limits that I thought would make for an interesting mix within the group.

I think all of us are just trying to create compelling characters and stories.

IX: Certainly there's an element at play here of the old storytelling convention where the least-powerful or most-maligned team member comes through in the clutch. But really, there weren't many characters that didn't get a key move in between last month and this month. Is it difficult to write action sequences for a team book that put everyone to use?

DJ: Group books are always harder to write. It's difficult to create a threat that is their equal, that allows each of them some solo screen time and creates opportunities for readers to get to know them.

Especially if you hit the ground running the way we did, with a large cast that was assembled all at once.

IX: Following his defeat, Peraxxus gets away and swears he'll be back for more. Between he and whoever planted the Signalmen, you've already got two major villains in place for the future. Can you hint at what else 2012 will hold for the team?

DJ: Adventure and change. This is a team that will have to adapt.

IX: The shadowy, threatening figure was a bit of a staple of your run on Booster Gold, and we see it again here. Will we get to find out sooner than later who is planning our heroes' demise? Or, for that matter, who buried those confounded robots?

DJ: Yes to both, though they are not connected.

IX: Someone had said somewhere that DC was going to let writers do whatever they wanted with the length of their story arcs and not worry as much about the collected editions as they did before the New 52. In that statement, I feel like the example was used that six-issue stories were typically “the norm” at the company, but obviously this story played itself out in five. Did you ever feel the need to “pad” a story to meet criteria for a collected edition in the past, or were you just able to use those additional pages to plant seeds for the future?

DJ: I was just trying to find a way for the story to feel like it was unfolding in a natural way. In this case, five issues.

Though I will note that Justice League International #6 is an epilogue to this story arc, while also serving as a prologue to the next.

IX: That said, on Booster Gold most of your stories ended an issue early and featured an afterword issue that tied up loose ends and set up the next adventure. Will we be in store for an issue like that next month or will it be right back into the deep end again?

DJ: See the above answer!  I like smooth transitions and I think we have one in the works.

Not to mention a surprise or two.