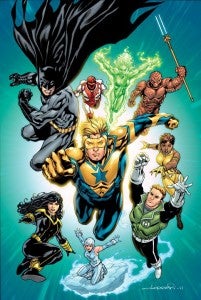 While DC Comics has identified Pandora, the mystery woman who appeared in all 52 of their September #1 issues, there remains the mystery of a woman who, despite two (well, okay, one and a half) cover appearances, has yet to make an on-panel appearance in the DC Universe: The black-and-gold-clad superheroine appearing on the cover of this week's Justice League International #5. It might be easy to speculate that David Finch, who drew this month's cover and who seems to be everywhere at once in the DC Universe these days, may simply have drawn this cover early to accommodate deadlines and not had the opportunity to redraw it once the character was removed from the team's lineup and/or the DC Universe. That would seem difficult, though, when you consider that he also drew previous covers which featured Godiva. If the pair were simply swapped out for one another, why would he know in time for the #3 cover but not in time for the #5 cover? And if they weren't swapped out for one another at editorial, why is Godiva missing from this week's cover? In this week's International Exchange interview, to be published on Monday morning right here at ComicBook.com, series writer Dan Jurgens explained that the character's appearance on the cover was "a mistake. A screw-up." The veteran writer goes on to elaborate (emphasis ours), "She shouldn't be there as she wasn't yet due to appear in the book. Given  the amount of people who look at these things, I have no idea how it ever made it all the way through to print." Widely speculated to be Alexandra Gianopoulos, a super-powered supporting character introduced during the Booster Gold: Turbulence story that took place in the Flashpoint universe, the mystery woman appeared on early solicitations for Justice League International #1 and set off a round of wild fan speculation as to her identity. Characters like Wonder Woman and Donna Troy were guessed and then poo-pooed by DC, before the character vanished from the cover completely before the issue was ever released. So--if she wasn't meant to appear in the book...yet...when will we finally see this character, and find out for sure who she is? And when we do, what does that mean for Godiva, notably absent from the #5 cover?

The International Exchange EXTRA: Who's That Lady?