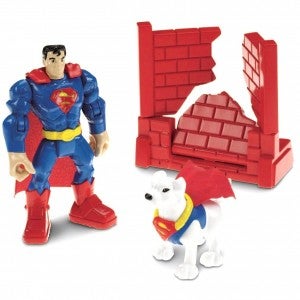 It wasn't that long ago that there was some controversy about the depiction of Starfire in  The New 52's Red Hood and the Outlaws, with a fan singling the book out as one that would not be appropriate for young kids. A couple of local Fox News affiliates followed suit, piling on that book (and Catwoman) in particular and DC's relaunch in general. The general response by DC and supporters of the title was that as a T+ book, it was clearly not being marketed to kids that age. Well, now The New 52 is well and truly starting to market to kids, albeit still not their comics. New Super Friends "Hero World" action figures have started appearing at retailers like Wal-Mart, Target and Toys R Us, and they feature distinctively New 52 features on characters like Superman and Batman. Even Krypto, included in the box with the Superman toy, appears less like a beagle (as he's traditionally been depicted in recent years) and more like a great dane or some other large, angry dog (as he appeared in his on-panel appearances in Grant Morrison and Andy Kubert's Action Comics). 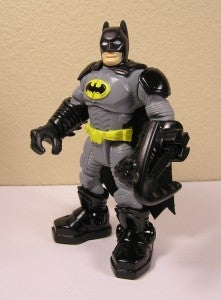 Notice the lack of red trunks, as well as the chunky boots and the odd seams and texturing on Superman's costume in the image above; while the exterior of the packaging depicts a more traditional Superman, and even this action figure doesn't give into the temptation to give the Man of Steel a collar, it appears as though somebody at some point in the production of this toy decided to reverse course and sync its look up with that seen in the comics and the upcoming Man of Steel movie. It's probably worth noting that the movie also doesn't seem to feature a collar on the costume. Batman, whose New 52 iteration hasn't been changed all that much from the (admittedly fluid) pre-relaunch look anyway, features one small detail that's a dead giveaway the New 52 is breaking into a toy store near you: If you look closely at his knees, you'll see little bat details that match up with the kneepads seen on the character in the post-Flashpoint world of the New 52. Other details that make the suit look more armored or textured have also been added which make him less like the Batman of Jim Aparo and Adam West and more like the Batman of David Finch and Christopher Nolan, but it's the kneepads (and the lack of exterior underwear, of course) that are a real game-changer in terms of telling fans The New 52 is for real--these new looks are even being sold to kids too young to be reading the comics now! The toys run for around $11 apiece, and can be found at the retailers listed above as well as Amazon. But they've been selling like hotcakes on Amazon and aren't available on the Target or Wal-Mart websites, so be careful--anything $15 or higher is a rip-off except for those fans most enthusiastic about getting the first-ever toys to feature these characters' new costumes.