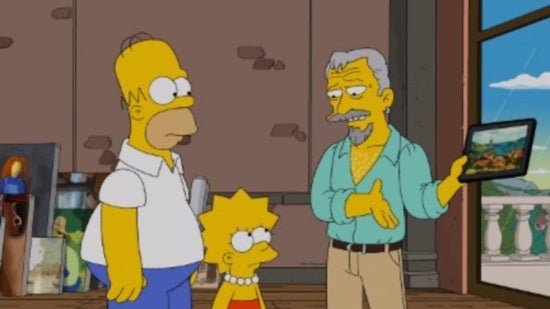 A new episode of The Simpsons will air on Fox tonight, called "The War of Art." In "The War of Art," after Lisa's new pet guinea pig destroys the Simpsons' living room art, Marge falls in love with a beautiful painting at the Van Houten's yard sale, which Homer snaps up for 20 bucks. But, when Lisa reveals it's by a famous early 20th century painter and could be worth $100,000, Marge and Homer face a dilemma: split the money with the Van Houtens, or keep the cash as a "cushion" for their kids. The voice cast includes Dan Castellaneta as Homer Simpson; Julie Kavner as Marge Simpson; Nancy Cartwright as Bart Simpson and Nelson; Yeardley Smith as Lisa Simpson; Harry Shearer as Skinner; Hank Azaria as Moe, Pamela Hayden as Milhouse and Jimbo; and Tress MacNeille as Dolph. The Simpsons, "The War of Art," airs Sunday, March 23 at 8 PM ET on Fox.

The Simpsons Season 25 Episode 15: The War of Art

The Last of Us Episode 3 Soundtrack: "Long Long Time"