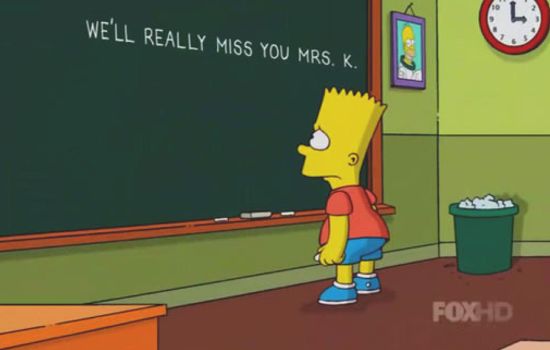 EDIT 11/4/2013, 10:30 a.m. EST: As noted in the comments below, this gag wasn't part of the regular Hobbit-driven chalkboard gag, but the Hobbit parody credits also ran as scheduled. Sorry for the mix-up; we were provided with the image before the episode was available.

As part of today's tribute to the late Marcia Wallace, Fox's long-running animated sitcom The Simpsons included one of Bart Simpson's trademark "chalkboard gags" acknowledging the loss of her character, Edna Krabappel--who, presumably, is the one who was making him write on the chalkboard all those times. "We'll really miss you Mrs. K.," Bart Simpson wrote on the chalkboard in the credits sequence ahead of Sunday night's new episode, "Four Regrettings and a Funeral." The original opening--which showed The Simpsons traversing Middle Earth as characters from The Hobbit--ran as well. You can see that here. Wallace died October 25 at her home in Los Angeles of complications from pneumonia. 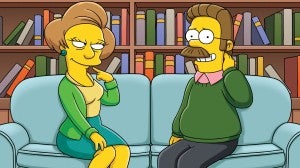 "I was tremendously saddened to learn this morning of the passing of the brilliant and gracious Marcia Wallace. She was beloved by all at The Simpsons and we intend to retire her irreplaceable character," said The Simpsons executive producer Al Jean in a statement at the time. "Earlier we had discussed a potential storyline in which a character passed away. This was not Marcia's Edna Krabappel," he said. "Marcia's passing is unrelated and again, a terrible loss for all who had the pleasure of knowing her." Yeardley Smith, who voices Lisa Simpson, tweeted: "Cheers to the hilarious, kind, fab Marcia Wallace, who has taken her leave of us. Heaven is now a much funnier place b/c of you, Marcia." Fox also re-ran "The Ned-Liest Catch," the show's 22nd season finale, as a lead-in to tonight's new episode. In the episode, Krabappel begins dating Ned Flanders, who struggles with her extensive romantic history. The pair eventually married; it's not clear how the writers will handle Flanders losing a second wife. Fox originally intended to show Wallace's Emmy-winning episode, "Bart the Lover," which first aired 20 years ago, but ran into "technical issues" clearing it, according to Time.

The Simpsons' Tribute To Marcia Wallace