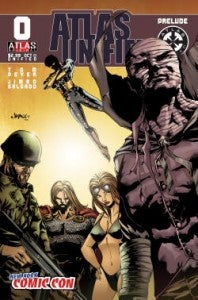 This fall, superheroes Grim Ghost, Phoenix and Wulf the Barbarian come together with hard-boiled cop Mike Lomax in Atlas Unified, Atlas Comics' first universe-wide crossover event. Billed as an event thirty-five years in the making and kicked off at last weekend's New York Comic Con with a special zero issue, the story will is written by industry veteran Tom Peyer and features art by Jimbo Salgado, who has moved over to comics from animation, where he has worked for years, including with Disney/ToonCity. ComicBook.com caught up with Peyer at the New York Comic Con to talk about the series. First, though, he gave us a bit of a primer on the history of Atlas. If you're familiar at all with Atlas Comics which you don't have to be it lasted under a year, but they launched so many characters and a lot of them appeared once, Peyer said of the original run of the comics, which was founded by Marvel Comics founder Martin Goodman in 1974. I'm putting a lot of them in there these characters who appeared once, like Sgt. Hawk and Kid Cody, the Western gunfighter. So, he explained, "it's a big time-travel story. If you liked Hourman, I will just hit you over the head with time again. [caption id="attachment_8712" align="alignleft" width="300" caption="Tom Peyer (right) is interviewed by ComicBook.com at the New York Comic Con. Photo by Zach Roberts"] 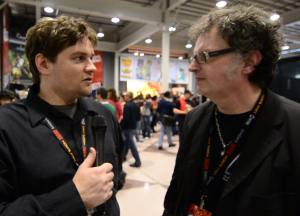 [/caption] Peyer's Hourman run for DC has been called one of the most unique and beloved DC books in the last decade by Comic Book Resources. Running for only 25 issues between 1999 and 2001, it nevertheless has a substantial following among other pros and fans on the Internet. Searching Tom Peyer's Hourman yields a first-page result Tom Peyer & Rags Morales' Hourman is a forgotten F---ing Masterpiece. So any comparison to that book should make readers stand up and take notice. Comparing the book to Hourman and other Big Two time-travel books like the recently-wrapped Booster Gold, he explained, it's easier not working within the framework of an established superhero universe. It's not just the details Atlas is like snow without too many footprints in it, and it just feels nice to be putting in some of the first footprints. It feels very free. Peyer, who enjoys the old Atlas Comics himself, said he's excited about the wide open spaces he has in this new universe and the variety of different directions he's able to take the characters. I always envied that first generation of fans, like Roy [Thomas] and Len Wein and Marv Wolfman and those guys, Peyer said. To be able to take it to the next step that way, directly from this great thing that was Stan and Jack and Mort Weisinger and all of those guys, and it feels kind of that way with [Atlas Unified]. He joked that there was a benefit to Atlas folding when it did, because thirty-five years of nobody coming in and doing anything is great! Not that he would have had to worry much about the history that had been created even if somebody did come in and muck with the characters. I don't know if you could consider them their next appearance after their previous one thirty-five years ago or whatever. I'm treating this as all first appearances, and I like to think when I do that I try to keep the essential core of what makes the character good and what makes the character that character. You can order Atlas Unified #0 from the Atlas Comics website, where the first eight pages are viewable for free. The first issue ships to comic shops in November. Jason Goodman, CEO of Atlas Comics and grandson of Marvel Comics founder Martin Goodman, said in a press release, We are very excited to have Tom and Jimbo on board for Atlas Unified! I am confident that their creative talent will ensure a new 'must read' from Atlas. These characters have never appeared together in one book before and I m proud to finally bring these incredible characters together for an epic battle across time!