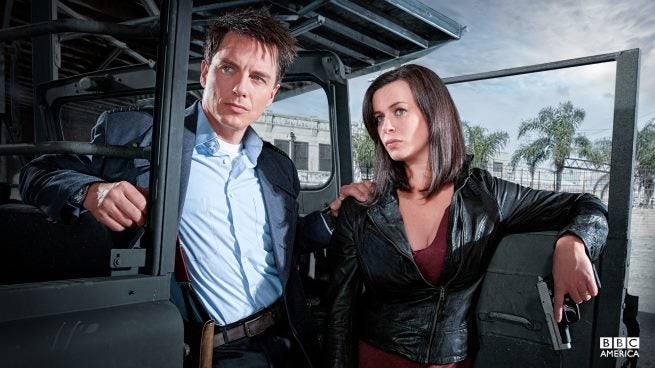 According to John Barrowman, the team behind Doctor Who spin-off Torchwood team are reuniting to continue the story with a series of BBC radio plays.

This would include Russell T. Davies, the show's chief writer, as well as Barrowman, playing the cocky immortal Captain Jack Harkness, and Eve Myles as Gwen and... you know what? I'll leave it there, because if I go on too much more the absences will be all too conspicuous and might spoil things for anybody still catching up on the show.

The Pittsburgh Post Gazette (via Metro) passed on word of the radio shows from an Arrow press event. Barrowman said that one of the "three or four" plays would feature the Torchwood team together, and the others would focus on individual characters. That seems an effective way to work around everybody's schedules.

"My sister and I are discussing the possibility of writing one of them."

John and Carole Barrowman co-written and published a novel, The Hollow Earth, as well as a Torchwood tie-in comic, Captain Jack and the Selkie, neither of which I've read.

Barrowman notes that he's now full time on Arrow but should the BBC want to bring Torchwood back to our screens as well as speakers, he'd be keen. It's a big 'if,' though and I can't see it happening any time soon. Torchwood was a victim of Doctor Who's success; there was no way little brother could live up to such a beloved first born as The Doctor.

At least the BBC have a good track record with radio plays an audio drama. Just this Christmas they broadcast Dirk Maggs' adaptation of Neil Gaiman and Terry Pratchett's Good Omens to many plaudits, good listening figures and a lot of genuine laughter.

Torchwood Returns, But Not How You Would Expect