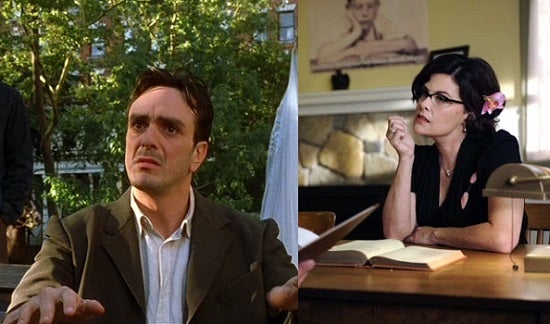 star Sherilyn Fenn and comedy icon Hank Azaria will join the cast of Showtime's Ray Donovan for its upcoming, second season in recurring roles. Azaria--best known for his numerous voice roles on The Simpsons including Apu, Moe, Chief Wigggum and Comic Book Guy--will play a major role this season as James Cochran, the ambitious head honcho of the Los Angeles FBI who becomes a thorn in Ray's (X-Men Origins: Wolverine villain Liev Schreiber) side. In a recurring role, Fenn will play his frumpy wife, Holly Cochran.  Production on the second season's 12 episodes is currently underway in Los Angeles and is set for a summer premiere on Showtime. "Frumpy" is a far cry from anything we've ever seen Fenn in; she played the seductive Audrey Horne in Twin Peaks and then followed that up with a handful of roles like the one in Gilmore Girls where she played the quirky, sexy type--think any character by Zooey Deschanel, but after she grows up.