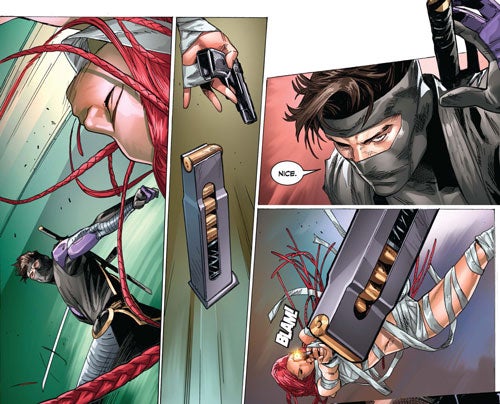 Valiant Entertainment has released a preview of next week's Ninjak #1, due in stores Wednesday from writer Matt Kindt and artists Clay Mann and Butch Guice.

Spinning out of the events of The Valiant, Ninjak follows the titular assassin into the next phase of his career and gives him his first solo series since the '90s.

You can check out the preview, teaser and solicitation text below.

He's got swords, style, a funny accent and he lives in castle. WHAT MORE COULD YOU WANT?! That's right,next Wednesday, NINJAK #1 makes its long-awaited debut in comic shops everywhere, and Matt Kindt, Clay Mann, and Butch Guice have cooked up one hell of a solo debut for the number one purple ninja in comics today. Each issue of this monster new ongoing series clocks in at 40 pages monthly with Kindt and Mann delivering a full-on superhero showdown in the lead story. Then, Kindt and Guice uncover another chapter of the never-before-told origin in an essential second feature we're calling THE LOST FILES.

Now: Colin King is Ninjak, the world’s foremost intelligence operative, weapons expert, and master assassin. And he’s hunting the Shadow Seven – a secret cabal of shinobi masters with mysterious ties to his training and tragic past.