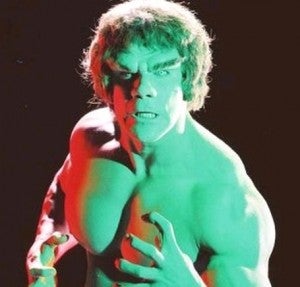 Earlier this month, Stan Lee, who co-created the Hulk, presented Lou Ferrigno, who played the Hulk on TV, with a body building lifetime achievement award at Muscle Beach in Venice California. Wizard World made a video of the event, which contains some great moments as Lee and Ferrigno reminisce about their friendship through the years and the late Bill Bixby. In describing Ferrigno's performance as the Hulk, Lee said, "He was born to be the Hulk. Nobody could have played that role better than him. And he actually acted. Another actor would have just had the green skin and torn down a few doors and things, but Lou was the Hulk. He lived that role, and nobody has ever forgotten it." In presenting the award to Ferrigno, Stan Lee said, "I am incredible proud to give this award to a guy who not only deserves it, because just look at him you can see he deserves it, but he's also one of the nicest guys you'll ever meet, and I'm so proud to call Lou Ferrigno my good friend."