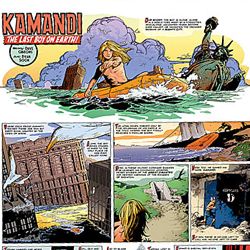 With volume one of DC Comics' Wednesday Comics series at its halfway point, I decided there had been enough story shown to review each strip. Overall I would definitely give Wednesday Comics an "A" for execution and quality. It's an innovative and fun read that leaves me eager to read every new edition. With that thought in mind, there are of course some strips that are better than others. So since it's fun to rank things, below are my rankings of the Wednesday Comics strips from best to worst. 1. Strange Adventures – This Adam Strange story was the most pleasant surprise of Wednesday Comics. Writer/artist Paul Pope's take on Adam Strange leaves me wanting to see him do an Adam Strange graphic novel. The artwork on this strip is simply incredible. 2. Batman – Writer Brian Azzarello has crafted a very well-done Batman story. Every edition has been compelling as a stand-alone strip, and the story is moving at a nice pace. It's not too complex or too simple for the format, but it is a good enjoyable read that is easy to follow. 3. Metamorpho – Not one of my favorite characters, but everything Neil Gaiman writes tends to turn to gold. Michael Allred's art is also a good fit for Gaiman's light-hearted style in this strip. It's a good story with some entertaining fun mixed in. 4. Kamandi – This is one of my favorite characters, and I was not disappointed by Dave Gibbons' take on the character. Writer Gibbons and artist Ryan Sook have taken a Prince Valiant style on the strip, and it works. 5. Hawkman – Kyle Baker has done an excellent job on making Hawkman interesting. I feel bad putting this one so far down the list, but really everything until this point on the list falls in the excellent category. 6. Green Lantern – Like Metamorpho, Green Lantern is one of the more light-hearted and fun strips in Wednesday Comics. Kurt Busiek has crafted a compelling story about one of Hal Jordan's old friends. 7. The Flash – Karl Kerschl has succeeded in creating a Flash story that fits the strip format. Like the Batman strip, each episode is a compelling piece of writing and keeps the story moving forward. 8. Sgt. Rock – What can you say? The Sgt. Rock strip is being drawn by comic legend Joe Kubert. It's Sgt. Rock the way he is meant to be drawn. The story has been a little bit slow to develop, but maybe it will pick up now that it looks like Sgt. Rock is finally going to get out of that chair. 9. Superman – Not bad, but not great either. It's an interesting concept having Superman feel out of place in the world, and I enjoyed seeing Superman go to Batman for advice. However, the story needs to move a bit faster, as too much time has been spent focusing on just how out of place Superman feels. 10. Deadman – This strip started out strong with a serial killer type mystery, but it has weakened in later episodes. Perhaps, it will all come together in the end, but the verdict is still out on this strip. 11. The Demon And Catwoman – Not bad, but it hasn't lived up to the initial concept, and I expected more from this strip. Like Deadman, the verdict is still out on this strip. 12. Metal Man – The Metal Man are some of my favorite characters, but there is nothing special so far about this standard bank heist story. It's fun seeing the Metal Men interact, and there have been a couple laughs in the strip, but the plot is dragging. 13. Supergirl – The bit with Aquaman was sort of funny, but this strip goes a little over the top. It's mildly enjoyable, but it fails to wrap me up in caring about what happens next. 14. Teen Titans – Like Supergirl, it's not a bad story, but it's standard fair for a Teen Titans story. With strips like Strange Adventures and Batman, the bar has been set high in Wednesday Comics for the strips to exceed expectations, and the Teen Titans doesn't. 15. Wonder Woman – Some readers probably love this strip, while others likely completely hate it. I have to give Ben Caldwell credit for trying a really different take on Wonder Woman. However, the whole dream storyline seems too confusing and muddled to follow in a strip format. It doesn't work for me, and I have to rank it as my least favorite.