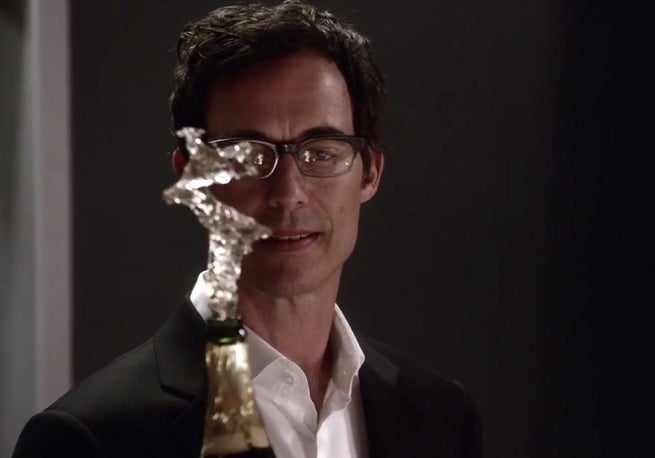 So...Harrison Wells is a sketchy dude. We know this.

Every week on The Flash, they seed a little coda at the end that points you in the direction of just how sketchy and what kind of sketchy he might be. He's obsessed with Barry, he's not afraid to use violence and...oh, yeah, he appears to be from the future, or has at least spent some time there.

So! Welcome to what will probably be a new feature: What suspicious things did Harrison Wells say and do this week?

First comes the revelation that he was working with General Eiling on experiments years ago which, at a minimum, inadvertently created Gorilla Grodd. That's a heck of a legacy to leave in and of itself, but Eiling in the comics was part of the Captain Atom project -- responsible for the creation of Captain Atom and Major Force. Coincidentally, Plastique was a member of the project at one point as well, which begs the question: Did Wells know her before now and neither of them acknowledged it?

Or, if that's too farfetched for you, did they create Captain Atom and Major Force?

Don't stop at things he's actually done, though: Did our man Wells say anything suspicious?

"It hasn't been invented yet."

At one point, Wells tells Plastique that "The technology needed to unsplice your DNA...it hasn't been invented yet."

That's...probably a clue, considering that Wells is knows the future. Did he send someone on a suicide mission, knowing full well that her condition would be treatable in her lifetime?

Wells just...kinda knows...how fast Barry would have to go in order to run on water.

"Powerful men have a way of avoiding consequences."

We got that by the fact that Wells murdered Simon Stagg and we've heard nothing at all about it since.

"I've got a whole other future in mind for you."

So...did he remove Grodd from the cage after/around the time of the particle accelerator, or did Grodd actually escape?

Either way, it seems he's put one of The Flash's most dangerous villains on a collision course with the team.

Wells Watch: What Suspicious Things Did Harrison Wells Do In The Flash Episode "Plastique?"