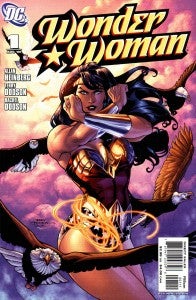 Recent editions of DC Nation, the ongoing, last page feature in the back of DC Comics' titles, have featured an open letter from Dan Didio of DC, throwing down an interesting gauntlet to fans of DC, most especially fans of titular heroine Wonder Woman. Didio states, "In case you didn't know, there is a group of Wonder Woman fans who feel that her ongoing series needs the numbering that would be reflective of her time and stature in the industry. After all, both Superman and Batman are closing in on issue 700, and Wonder Woman, being an integral part of our trinity, should be right up there with them." Wonder Woman has undergone several revamps over the years in her on ongoing, solo series. She's seen a notable relaunch in the 1980's with artist and writer George Perez and most recently another relaunch, currently written by noted comic book writer Gail Simone. This series, currently on issue 35, is heading towards a milestone event, according to attentive fans of the Amazon. According to the chronology of the series, issue 45 of this series will represent Wonder Woman's 600th issue, and there is a call to set the numbering of future issues from 600 on, reflecting her historical place alongside Batman and Superman. Didio, even though he has expressed some ambivalence over renumbering, had this to say in DC Nation this month, "Here's the deal. 600 postcards for a 600th issue...if the demand and desire is there, then speak out, and I promise you will be heard." The main stipulation is that there should be no multiple mailings from the same person or persons; 600 unique postcards. Fair enough, and hopefully fans of the heroine will meet the challenge before issue 45 has to be ready to print. It seems only fitting that Wonder Woman get the same treatment as the only other characters who share as much history as she in the DC universe, the aforementioned Man of Steel and Dark Knight. Just in case you want to help in the campaign, send your postcards, demanding Wonder Woman be numbered to issue 600 with issue 45 to the following address: Dan Didio c/o DC Comics, Inc. 1700 Broadway New York, NY 10019