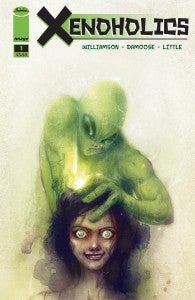 and Shadowline are aiming to help out those among us with an addiction of the extraterrestrial variety. Xenoholics is a new series from writer Joshua Williamson and artist Seth Damoose. Dan Duncan is doing painted covers for the series. "Xenoholics is about aliens and I didn't want it to be one of those books where the aliens are only hinted at," said Joshua Williamson. "But aliens aren't the only stars! There are also the crazy people who believe in them. I've always been fascinated with people who claimed to have been abducted or believe with all their hearts that aliens are out there… watching us. This is their story as they get thrown into a larger conspiracy, and we get to see how they react to it. Our main goal was to take the alien genre and spin the clich s on their heads, creating without a doubt the weirdest book I've ever written." "Xenoholics will do for aliens what Chew did for cannibals," said Shadowline Publisher Jim Valentino. "It's smart, funny and surprising. A perfect addition to Shadowline's commitment to excellence in diversity and, I believe, our next hit." Xenohlics #1 is a 32-page full color mature comedy comic book with a cover price of $3.50. Xenoholics #1 is scheduled to arrive in comic book stores on October 19, 2011.