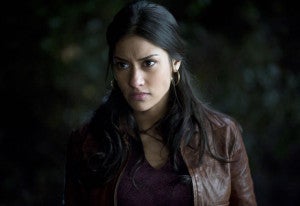 Zev Borow, the writer/producer on Chuck who penned the six-issue Wildstorm comic book miniseries set in the world of the show, is bringing a new series to USA based loosely on a French short film--and he's bringing some familiar faces (at least to our readers) with him. Deadline reports that True Blood's Janina Gavankar and Young Justice's Khary Payton will co-star opposite Ben Rappaport in USA's single-camera comedy pilot Love Is Dead. Written and executive produced by Borow, the show is set at an agency that will dump your significant other for you so that you don't have to be there for the confrontation. Love is Dead centers on Rappaport's character, a man who is dumped by the agency and gets a job there to find out just what was so terrible about him that his ex hired them in the first place. Gavankar and Payton will both play other representatives at the company.