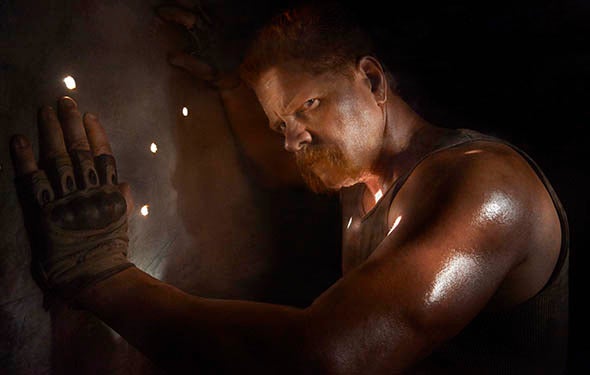 Recently, we've been noting that in a season meant to follow the comics very closely, there are a couple of events that should be coming right up on the horizon for AMC's The Walking Dead.

Within three issues after the massacre of The Hunters (which took place two weeks ago on the show), Rick Grimes and company were on the road to Washington, DC when a game-changing secret was revealed by one of Abraham's group -- and then they met Paul "Jesus" Monroe and were introduced to the Alexandria Safe-Zone.

EDIT: As user "paatch" rightfully points out below, it is Aaron, not Jesus, whom they meet on the road. I'm leaving the initial incorrect statement above for clarification purposes but will replace any subsequent references.

Probable spoilers for tonight's episode of The Walking Dead beyond this point.

So...what does all this have to do with the fact that Josh McDermott (Eugene) and Michael Cudlitz (Abraham) are on Talking Dead tonight?

It's likely that if you're the kind of person who reads speculation and spoiler articles, you already know that in the comics, Eugene Porter is not, in fact, a former government scientist who will secretly save the world from the zombie apocalypse.

Rather, he's a former high school science teacher who was smart enough and fast enough talker to con Abraham and company into protecting him, since he wasn't physically capable of surviving on his own in the world of The Walking Dead.

All that came to a head in The Walking Dead #67, when Eugene dropped the radio he'd been using to supposedly communicate with the remaining fragments of the government. Just days out from Washington, Rick asked him an important question: Were there ever any batteries in it?

Eugene, of course, said no.

Abraham responded about how you'd expect him to, although Rick prevented him from actually killing Eugene or even roughing him up too badly.  Of course, in the context of the TV series...Rick isn't there.

Timing-wise, this would be the perfect week to unfurl it. With the midseason finale coming up at some point in December, we're presumably working toward a conflict with the people at the hospital, and/or the first appearance of the Safe-Zone (will it be in Alexandria, though, or Richmond? That's the question). So between the end of October, when they killed the Hunters from Terminus, and the midseason finale, one assumes this scene here has to play out (it was directly between the two events in the comic, with all three separated only by four issues).

Yeah, Glenn will probably be the guy to step in, and it's hard to imagine they'd kill Eugene (who's still alive in the comics, after all...), but the TV show has shown a willingness to zag instead of zig from time to time.