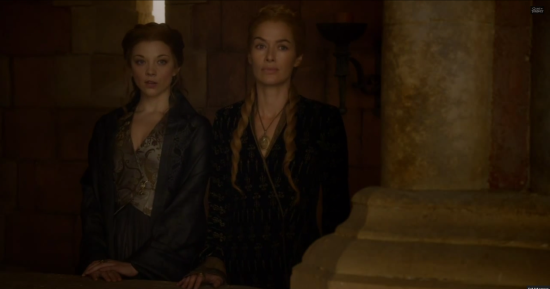 Actress Lena Headey, who plays Cersei Lannister on Game of Thrones, just can't seem to resist posting spoiler hints on her Instagram feed. Warning: there are some major, big time SPOILERS for Game of Thrones coming up. Prior to Sunday night's episode airing on HBO, Heady posted a photo of her thumbs being shoved into Pedro Pascal's eyes. This ultimately proved to hint at the final fate of Pascal's character from the show, Oberyn Martell, who had his head crushed by Gregor "The Mountain That Rides" Clegane. Headey has posted another photo to her Instagram feed hinting at what's to come before the end of Game of Throne's fourth season. The photo is of several stones arranged into the shape of a heart. Fans of the books will get what she's hinting at immediately. For those less familiar and who don't mind having things spoiled (once again, you've been warned), this is hinting at the appearance of Lady Stoneheart, who is Catelyn Stark returned from the grave by supernatural means. Catelyn, in her new persona as Lady Stoneheart, takes over leadership of the Brotherhood without Banners and sets them on a much more vengeful path, hunting down anyone she feels is responsible for the fall of House Stark and the crimes committed at the Red Wedding. I had assumed that she would make her first appearance in the Season 4 finale, but if Headey is already leaving hints for fans then its possible she'll show up in this week's episode. Game of Thrones airs Sundays at 9 PM ET on HBO.