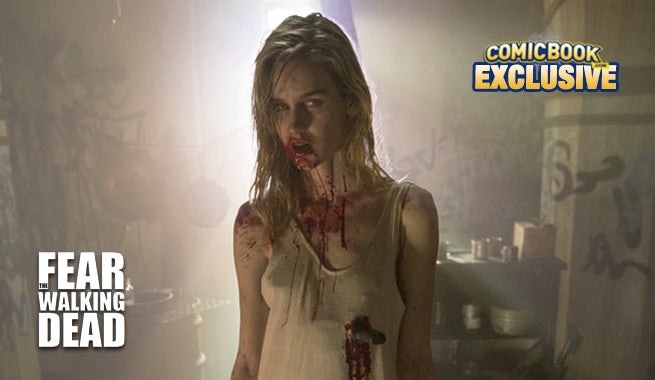 The apocalypse is upon us and it is all Lexi Johnson's fault.

Okay, not really, but in the upcoming premiere of Fear The Walking Dead, the companion series of The Walking Dead promising to show audiences what happened when the world fell apart, we get our first look at patient zero. In the series premiere, we will meet Gloria, the world's first zombie.

Gloria, who has been featured in trailers and promotional images, is played by a young actress named Lexi Johnson who happens to be a huge fan of The Walking Dead. "It's really surreal. It really hasn't hit me yet. I'm actually a giant fan of the original show," Johnson told ComicBook.com during an exclusive interview. "A couple months before I landed the role of Gloria, I was just sitting there saying, 'How amazing would it be just to be one of the zombies on the show?' And then a couple months later the opportunity came and I booked it!"

The audition process was a bit more detailed than any usual audition, though. Johnson never got the chance to see any of the other girls the casting directors brought in, but she tells us, "They had us go into a make-up chair and put on the full make-up," for each audition. From there, it was time be a zombie. "In full make-up, they gave me full wardrobe, they dowsed me in blood with the contacts, they turned on the camcorder, and they were like, 'Alright, start walking. Start pretending like you're eating someone.'"

That sounds like a great day on its own. Who wouldn't want to take selfies as a zombie and then walk around terrorizing people. "As soon as they put the contacts in with the blood, it was almost like second nature to switch into zombie mode," Johnson says about her first go as an undead.

How does one direct a zombie, though? Surely, AMC and their production teams have it down by now with five seasons of The Walking Dead under their belt. Johnson says they were pretty specific with how they wanted her to eat some face for Fear's pilot episode. "'Violently rip your head back and forth like you're really tugging on the meat!'" is apparently the direction Adam Davidson gave to her. "The meat you see me ripping off of his face is actually pantyhose," Johnson revealed. "They realized pantyhose has that stretchy feel they're looking for."