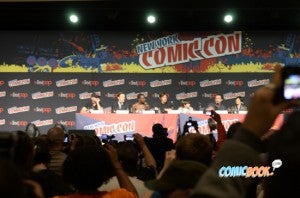 Hosted by Chris Hardwick, the panel includes Robert Kirkman, Gale Ann Hurd, Andrew Lincoln (Rick), Chandler Riggs (Carl), Norman Reedus (Daryl), Danai Gurira (Michonne), David Morrissey (The Governor) and Michael Rooker (Merle). They started off the panel showing what was the first four minutes of the season premiere. Clip opens on a walker's eyeball in a house where almost all of the men (including Carl, but not Glenn) kick in the door and take out two zombies. There's almost a friendly fire incident between Rick & Daryl. Carl shoots his first walker. Glenn leads Maggie in the side door and then the rest of the ladies come in the front. Rick is clearly upset when he finds that Carl has foraged some wet pet food from the cupboards and chucks it against a wall. Just as they think they can get comfortable in the house, they see walkers that were attracted by the commotion ambling up. There's no dialogue, but the tension and frustration is so easily read off the actors' faces. 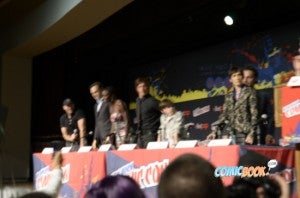 Hardwick read a letter from Glen Mazzara expressing his regretting his inability to be in attendance due to other work commitments. Robert Kirkman says the show was united in the idea that, after how they ended the last season, they felt they had to hit the ground running. Andrew Lincoln shares that he made the fatal mistake of walking into the writer's room and asking where they think Rick's breaking point is. Chandler Riggs is excited about the growth of his character. Hardwick noted that it seems like a natural progression that his dad would eventually relent, as the group needs all hands killing zombies. Gale Ann Hurd indicated that, this year, fans won't be saying, "where the hell is Carl? Stay in the damned house, Carl," but, "Carl is in the damned house killing zombies." Before talking about the show, Norman Reedus recruited all in attendance to sing happy birthday to his son, Mingus. The crowd said "awwwww" to the idea and complied for what was a genuine moment. Then Reedus shared how Rick is becoming like a brother for his character, replacing Merle's role. Danai Gurira is just thrilled to be a part of this show, which has such a strong, dedicated following. When asked about Michonne's pets, the actress indicated she can't go into it about her character, but that she really admires how the character could leverage zombies as a pack mule that, being armless and jawless, poses her little potential for harm and is like a pet she doesn't have to feed. David Morrissey is leaning heavily on Kirkman's previous writing about the Governor, which he thinks is brilliant. Michael Rooker was on the panel and when Hardwick offered an open question for the Rooker to say whatever he could about his stuff this season, to which he replied, "I'm a tough a--hole." Opening to questions from the crowd, the panel was struck by how many little kids (12 and younger) were up asking questions and watching the show. When a 10 year old girl asked if Chandler Riggs was hoping for a new friend to replace Sophia or maybe a girlfriend, which ilicits a lot of laughs, especially as Hardwick works it by saying it was a logical, yet creepy question, later saying how much creepier it would have been if she had been 30. Riggs wasn't sure what he could say, but he did hint that he (13) and Beth (17) might wind up a thing. A daughter asked Lincoln and the panel if they would take a look at the Walking Dead tattoo on her mom's leg. After making sure it was the leg (and recorded for his defense if his wife asked), he hopped off the stage & took a look. After a bit, he was joined by Reedus and, despite saying he didn't want to see if he wasn't included, even Rooker creeped to look from the edge of the stage. There was a rush of camera-toting press to photograph it, as well. There was a lot of attention for Reedus and Riggs from the ladies (of appropriate ages). All the young girls wanted to talk to Chandler and the adult women were saying things like "you have beautiful eyes" to Reedus. When asked about the tension/chemistry between Daryl and Sophia's mom, Reedus indicated he just doesn't think Daryl "has game". He feels the bond between the two characters have to deal with them both being damaged goods, as part of his back story was that he had a rough, abusive childhood. Reedus indicated that he doesn't see Daryl as ready for romance or to just take a woman against a tree and rip her shirt open (as part of a passionate, consentual scene), to which many of the ladies in the crowd voiced their disagreement/disappointment. Lincoln expresses that he felt the first season was a very linear discovery of the new world we are in, the second season was a slow battle for power and the third will be the clash between two strong camps. He feels his character goes really dark in this season. In talking about how one of the principles inherent in the show is change being constant, Lincoln talked about the great actors the show lost from the deaths of Dale and Shane, but it's one of the necessary items to keeping it grounded and constantly changing the dynamics involved. When asked if he plays the same twisted Governor from the comic book, Morrissey's "wait and see", "it's different" and other hedges brought noticeable grumbling from the crowd with the tension only broken when Kirkman joked that no one will be skipping along Woodbury. Last question was a fan starting off with, "well, I have the DISH Network..." and didn't end well, as Kirkman jokingly led a chant of "Screw DISH!" and Hardwick delicately suggested choosing another provider. The crowd was not enthused when an audience member asked about a character being dead in the comic book and what romantic developments might be possible then. Kirkman stressed that the show and book diverge from one another, but the dead character matched up with a joke between Lincoln and Riggs. They took one more question to try to get the bad taste of a spoilery question out of everyone's mouth, but the next fan asked Kirkman if he is ever going to cure zombie cause, which was universally groaned at and dismissed.