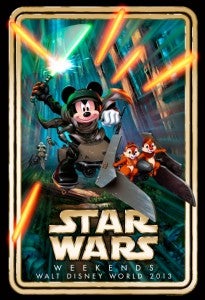 For the first time since they took over Lucasfilm and thus ownership of Star Wars, the Disney Parks blog have revealed the logo and first guests for their annual Star Wars Weekends. G.I. Joe star Ray Park, who portrayed Darth Maul in Star Wars Episode I: The Phantom Menace, will be one of the celebrity guests in Weekends I and II. Hitchhiker's Guide to the Galaxy actor Warwick Davis, who played Wicket in Return of the Jedi, will be one of the guests during Weekends II and III. Disney promises more announcements to come. It's not yet clear whether this summer will be treated as more special than others, as the Jedi and Sith are now an official part of the Disney family. If so, it's likely they'll have some of the more prominent Star Wars stars  to be announced.