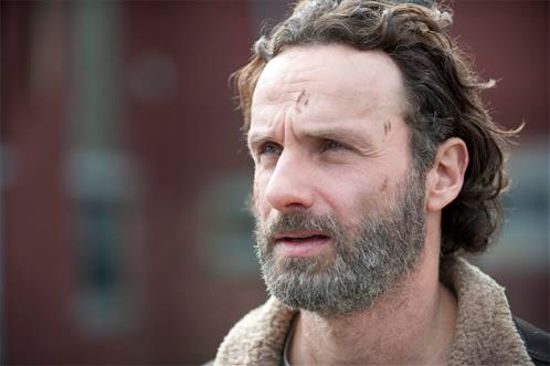 At the end of The Walking Dead Season 4 Finale, Andrew Lincoln's character Rick Grimes delivered a line which was somewhat familiar to fans of the comic book. While we had initially speculated that Rick might say the famous "We are the Walking Dead" line, it was actually another famous line from the comic book that he delivered. It was a line that most would have suspected couldn't be said on television, and it wasn't exactly. In The Walking Dead #64, Rick Grimes says, "They're going to feel pretty stupid when they find out. That they're f***ing with the wrong people." However, that's not how the line played out on The Walking Dead Season 4 Finale. On the Talking Dead, Lincoln explained, "There is…Am I allowed to say this? Are we allowed to say it on live TV?" Chris Hardwick interjected, "I don't know if you can say the actual word, but you can allude to it." "Well, there is a word…there was a variation on that last line. And I think you can all imagine what that word was," said Lincoln. "I think the last line was 'They're screwing with the wrong people.' And the other one was a little bit spicier." Lincoln added, "There was an f-bomb. And I just didn't want to say the line that we actually used, so I needed another take. The rest of them felt really good." When Hardwick asked what the reason was behind not having the f-bomb in the show, showrunner Scott Gimple explained, "Well, the Federal Communications Commission….families."