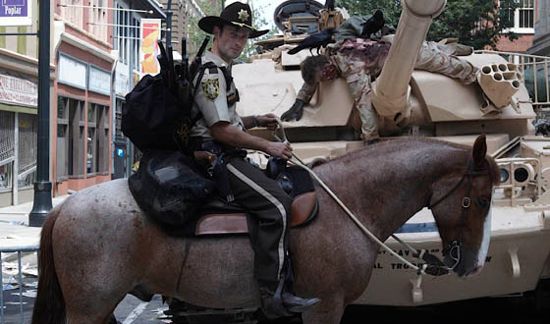 Have you ever wondered why there are no zombie animals on The Walking Dead TV show? The question was put to several cast members of The Walking Dead at the recent Nashville Comic & Horror Festival. Actor James Allen McCune, who played Jimmy from the farm, revealed that the cast had a conversation with Greg Nicotero about that very subject. He said that they were told that becoming a zombie was sort of like chicken pox that it didn't transfer over the species line. It's an exclusive disease that humans got lucky with. Actress Jane McNeill, who played Otis's wife Patricia, added, "They don't use a lot of dogs and cats and things like that, because of the humane society. I mean I thought I was going to get some hate mail about the chicken scene, but I didn't." McNeill continued, "It seems so ludicrous that we shoot children, but we're really worried about using dogs and cat. I guess the horse from the first season that the zombies got on. They got so much flack about that." McCune revealed that the horse was supplied by a company that specifically trained horses to fall for TV shows and movies. The humane society was present on the set for the horse scene and is always there for every scene involving animals.