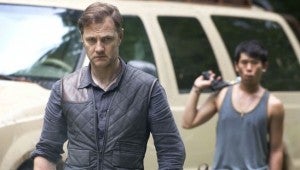 Over at TV Line, their regular spoiler column Ask Ausiello took a look at two comic book adaptations this week--The CW's Arrow and AMC's The Walking Dead. Very mild spoilers ahead for The Walking Dead, somewhat more substantive (but still not game-changing) stuff for Arrow, so read on at your own peril. "This week's Woodbury-set hour features one of the show's most iconic images ever," said columnist Michael Ausiello, "and one fans of the comics will surely recognize." It's hard to guess what that could be, but it's probably likely it's something involving the Governor's creepy living quarters or his zombie daughter. After all, it says "images," not "moments," which rules out things like amputations, deaths and the like. That's pretty cryptic, and while it bodes well for the episode, that's nothing compared to what Ausiello had to say about Arrow. He continues, "This week, of course, marks the debut of DC Comics baddie Deadshot. But it's Episode 4 (airing Halloween night) that promises to be the show's first game-changer when, well, let's just say that someone spies Oliver slipping into his 'costume.' And that lookie-loo might not be the only person who gets wise to Arrow's true identity that episode!" Of course, the most likely candidates here are Laurel or Ollie's sister "Speedy." In any event, the "other" person is likely to be Diggle, who's clearly been suspicious all along and who seems better suited to be an assistant in Ollie's private little war than an impediment. Arrow airs Wednesday nights at 8 p.m. EST on the CW; The Walking Dead airs Sundays at 9 p.m. EST on AMC.