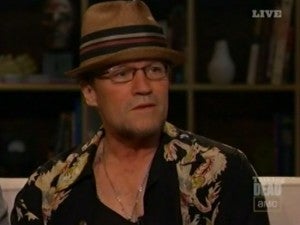 Warning, there are spoilers for this week's episode of The Walking Dead contained in this recap of the Talking Dead. Michael Rooker, who plays Merle on The Walking Dead, was tonight's surprise guest on the Talking Dead. When Rooker first arrived, host Chris Hardwick informed him that he died really hard on tonight's episode of The Walking Dead. Michael Rooker quipped, "Well, if' you're going to die, then you might as well die hard. What is this easy crap? Forget it." As far as what the cast did for Michael Rooker's last day, Rooker said, "We shot at a little pub area. We used their parking lot to stage that whole sequence. And at the end of the day, we went into the pub and had a drink and did a few speeches and some hugs and kisses and all that kind of stuff and it was a lot of fun." When Hardwick said that Merle became the guy that Daryl hoped he would become at the end, Rooker leaned in and said, "Merle was already that guy." Rooker added, "You know what. You don't just become someone new. You know under stresses you do…don't get me wrong, people do change. But you know that was already inside Merle." When asked why Merle let Michonne go in the car, Rooker said, "You know what, I think he got tired of listening to her." Rooker added, "She wasn't needed anymore. I had already figured out I'm going to do this with her or without her, and I didn't want to listen to her anymore. I'm sorry. Get out of the car, please." When asked if Merle went on a suicide mission, Rooker said, "I don't think it was ever, in my mind, it was never a suicide mission. In my mind, it was hitting the beaches. Ok, yeah, granted you may die. But you don't think of dying. You go and you do your job. My job, plain and simple, I think you already stated it, was to go in, make an entry, take out as many as I possible can and make an exit. Well, you know, the exit thing didn't happen. Although, I've got to tell you, I did make quite an interesting exit, but it wasn't the one I was thinking of." When Hardwick suggested that Daryl stabbed Merle so many times to get back at him for things he had done, Rooker said, "Ah, I think you're way off base. I don't think that's the reason at all. I think you just get into…he was emotional of course he lost it. His brother's gone. And we have always said to one another, this is not on camera anywhere, but you make that pact, just like we [pointing to The Governor] make that pact as members of Woodbury, you don't leave anybody alive as a zombie. You've got to put them down, plain and simple. That's the only humane way to do it." When asked if Merle's hart was with the prison, with Woodbury, or just with Daryl, Rooker replied, "Merle's heart has always been with his brother, and his with mine."

The Walking Dead: Merle’s Heart Has Always Been With His Brother