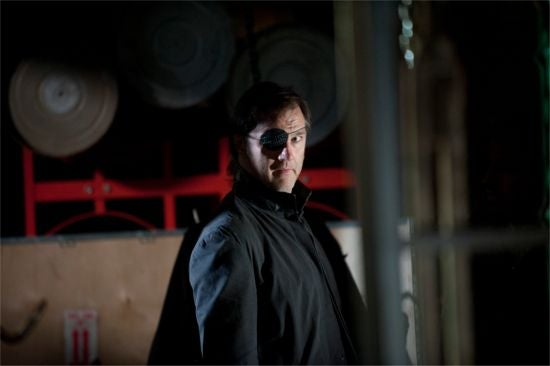 There are some rather oddball conspiracy theories circulating about The Walking Dead. Many of them have to do with last week's "Prey" episode, but others have been circulating for awhile. We're not sure if any of these conspiracy theories will pan out to be true, but they do make for interesting conversation. The Governor Bitten – In the "Prey" episode, when Andrea opens up the door to the stairwell and unleashes a horde of walkers on The Governor, he seems to be facing an overwhelming attack. As Andrea leaves to let The Governor fend for himself, The Governor appears to have little chance of escape. However later in the episode, The Governor shows up unexpectedly and grabs Andrea just as she is about to reach the safety of the prison. The Governor is later shows talking to Martinez, Tyreese, and Milton. However, he appears to be acting a little squirrelly. While it's likely his mysterious disposition is due to him hiding the fact that he's captured Andrea to torture, some have been speculating that The Governor might have been bitten or scratched by a walker. Of course, The Governor had not become a walker by the end of the episode, but the transformation can take different lengths of time. Could The Governor have been scratched or bitten? Does he know it's only going to be a matter of time before he turns? Martinez Burned The Walkers – While the clear implication during the "Prey"  episode was that Milton burned the walkers in the pit, there are various conspiracy theories that maybe it wasn't him. One of the theories is that maybe Martinez burned the walkers, because he wanted to cast guilt toward someone else like either Tyreese or Milton. Lori Is Still Alive – When appearing on the Talking Dead, Kevin Smith voiced this conspiracy theory, saying that Lori's body was never shown. Also, in the previews for this week's Walking Dead, Rick once again has another vision of Lori, but this time Lori isn't in her white gown. She's actually looking very much like she did when she was killed off. Could it be that it's not a vision at all, but Lori actually returning?